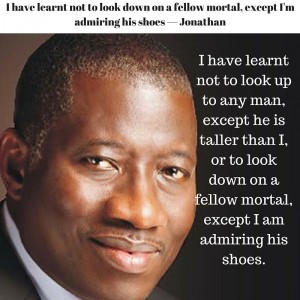 Remarks by His Excellency, Dr. Goodluck Ebele Jonathan, Former President of the Federal Republic of Nigeria

I thank the Southern Christian Leadership Conference, for inviting and honoring me today, and especially so, as this invitation comes right about the period when the world stands still in recognition of the selfless sacrifice of Dr. Martin Luther King Jr. When we think of the Southern Christian Leadership Conference (SCLC), it is virtually impossible to separate this worthy body from its founder, the late great Dr. Martin Luther King Jr, or from epoch making landmark events of the American Civil Rights movement.

I am pleased to know that the Southern Christian Leadership Conference is not just one of the great American institutions, it is also one of her more potent vehicles for the advancement of liberty and freedom for all God’s people. For that, I also commend Charles Steele for his leadership and commitment to peace and justice nationally and globally.

The Southern Christian Leadership Conference and Dr. Martin Luther King Jr’s principles of non violent protests played a great part in the independence movement in my native country Nigeria and indeed throughout Africa as a whole.

Dr. Martin Luther King Jr witnessed the British Union Jack being lowered in Ghana in 1957 when Ghana became the first Sub-Saharan African nation to gain independence, an action which set off a positive chain reaction all over the continent.

In 1963, Ambassador Leslie O. Harriman, Nigeria’s Permanent Representative to the United Nations, who prosecuted our anti apartheid strategy at the UN, testified of the support he received from Dr. Martin Luther King Jr in kick starting that noble effort.

Speaking for my foundation, the Goodluck Jonathan Foundation, I must say that I have been inspired by this great man and the worthy institutions and legacies he left behind and I am further inspired to continuing doing good and advancing human freedoms just by being present here today.

My personal takeaway from Dr. Martin Luther King Jr, is service to God and the brotherhood and equality of all men before their Creator.

In keeping with that, I have learnt not to look up to any man, except he is taller than I, or to look down on a fellow mortal, except I am admiring his shoes.

Those words helped me deliver on my stated promise to deepen democracy in Nigeria and in the process demonstrate through action that nobody’s political ambition is worth the blood of any Nigerian.

Once again, I thank the Southern Christian Leadership Conference for having me. May God bless you and continue to raise up from among you men and women who will continue in the footsteps of your worthy forebears.