Musician and sympathizer of the New Patriotic Party (NPP), Kwame Asare Obeng, popularly known as Kwame A-Plus, has said he never accused the two Deputy Chiefs of Staff of taking bribes, although he branded the appointees as “corrupt and thieves.”
He said he has no evidence that the two [Samuel Abu Jinapor and Francis Asenso-Boakye] are involved any corrupt act.

He said “Sometimes, people don’t get your explanation when you talk about corruption. Corruption does not only mean that the person has taken a bribe and so people might think that two persons I have mentioned have taken bribes; no, they have not taken any bribe anywhere.”

In a Facebook post, A-Plus who declared his support for the NPP wondered why the two personalities were appointed to serve in government.

He said “NPP delegate’s congress…. 7 months of NPP government. So far so good except appointing some very corrupt officials including the two very stupid deputy chief of staffs. It’s amazing how Nana was able to appoint thieves whose level of stupidity is the same. Arrogant and corrupt fools. You think you’ll be in power forever. Even John Mahama I was not afraid of him then you.”

But with barely 24-hours left for him to provide evidence to back his corruption claims, he said he deliberately twisted the narrative to paint a different picture.
play
He said, “when I said corruption, it has a meaning, but maybe it is in the minds of some people that they [Jinapor and Asenso-Boakye] had taken a bribe, no it is not so.” 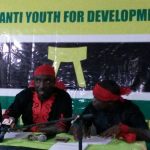