Member of Parliament (MP) for Assin Central, Kennedy Agyapong has appealed to management of Okay FM and Chief Executive Officer (CEO) of Despite Group, Dr. Osei Kwame Despite not to sack controversial presenter, Valentina Agyeiwaah also known as Afia Schwarzenegger.

Reciprocating President John Dramni Mahama’s “compassion” to the Guantanamo detainees – the outspoken lawmaker says he has decided to let everything go and have “compassion” on the radio presenter.

“I will urge Despite to let her go and work. I know people won’t agree but we are now doing the job of President Mahama and I would have compassion on her,” he said.

His remarks comes after Despite Group, owners of OKAY FM rendered an apology to the lawmaker and his station, Oman FM – which was also attacked by Afia Schwarzenegger.

Genesis of the verbal war

“I’m not saying Mahama is the best or worst president ever in the country but if you want to attack him, attack his governance but don’t accuse his mother and brother of selling drugs,” she stated.

She further questioned Kennedy Agyapong about the work he does aside politics.

According to the vexed radio presenter, his [Kennedy] Madina-based radio station, Oman FM has collapsed.

“Kennedy Agyapong, Ghanaians want me to ask you the kind of work you do. At times we are not able to tell people the truth straight in their face. Kennedy Agyapong what work do you do? That radio station which has collapsed? The station which I cannot tune in even though I stay around Madina?” she quizzed.

The attacks led to a response by the NPP firebrand on his station, Oman FM where he threatened to release naked pictures of the presenter on social media – he angrily used abusive words on the presenter which wasn’t friendly.

“The structure of the Despite Group of Companies is not to malign, denigrate, insult or condone and support acts of insults against personalities in society.

“We hereby extend our unequivocal apology to the general public, Oman FM, Honourable Kennedy Ohene Agyapong and all other persons who may have been scandalized or have suffered in any way as a result of this incident,” portions of the statement read.

However, Kennedy upon receiving notice of the apology statement, stated on OMAN FM that – he will no longer trade insults with the beleaguered presenter.

He advised that – “Afia Schwarzenegger must not let anyone use her as a channel to insult others.” 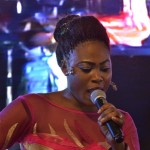