As an astute lawyer and an experienced politician, Madam Hilda Addo had expected Nana Akufo-Addo to have vehemently condemned the “unconstitutional” suspension of Paul Afoko by some New Patriotic Party (NPP) executives.

The National Executive Committee of the NPP on Friday 23 October, 2015, unanimously endorsed a recommendation of their National Disciplinary Committee to indefinitely suspend Paul Afoko from his position as National Chairman of the party.

As matters intensified, the flagebearer of the NPP, Nana Akufo-Addo attempted to shower cold waters on it by urging all members of the party to appreciate the work of the organs which acted to suspend Mr. Afoko.

This was captured in a statement he copied to Peacefmonline.com.

But speaking on Radio Gold on Wednesday 28th October, 2015, Madam Hilda Addo explained that the premise on which the executives acted to suspend Paul Afoko was “unconstitutional” and she felt sad to read her flagbearer supports the action.

According to the former Member of Parliament for Kwadaso, it is shameful the NPP has acted this way and must bear in mind they can’t win the 2016 general elections with a divided front.

“I want to believe the statement that came out was not written by Nana Akufo-Addo. I want to believe someone wrote it without informing him. If he did the opposite then it means he supports an unconstitutional move. He is a big time lawyer and I believe he is against the suspension of Mr. Paul Afoko,” she said. 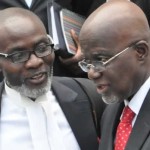