flagbearer of the New Patriotic Party (NPP), Nana Addo Dankwa Akufo-Addo, has dismissed suggestions that his arrogance is what has kept his party in opposition.

According to him, the ongoing propaganda by the ruling National Democratic Congress (NDC) to paint him as arrogant has failed.

He noted that as a public figure, “I just have to be myself.”

“The impression I get is that people recognise somebody who is genuinely interested in doing something about the conditions of the country and who has devoted his life to that. So, that’s the way I approach it…those who come into contact with me and listen to me, make up their minds and I’m hoping that it leaves a positive impact,” Nana Addo said in response to what he would do to change people’s impressions about him.

On the 2016 general elections, Nana Addo said he was ready and in good shape physically. According to him, the current atmosphere in the country is favourable for the campaign messages. 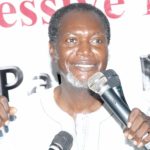