A former cleaner of the Korle-Bu Teaching Hospital who conducted an abortion on a woman at Gbawe Top base in Accra has been admitted to bail.

Yartey, aka Doctor, who claimed to be working at the Korle-Bu Teaching Hospital as a medical practitioner, was granted bail in the sum of GH¢ 40,000 cedis with two sureties to reappear on January 26.

Prosecution said it intends to amend one of the charges after police ascertains the recent law from the Pharmaceutical Council.

Yartey, who is being held for causing abortion and unregistered person practicing as a pharmacist, has denied the charges before the Court presided over by Mrs Abena Oppong Adjin-Doku.

On December 22, Prosecuting Chief Inspector J.B Asante said the complainant, Gifty Mensah, is a shop attendant and a resident at Gbawe Top base in Accra whiles the accused person resides at Achimota.

According to prosecution, the complainant was two months pregnant when accused person introduced himself to her and the boyfriend as a doctor working at the Korle-Bu Teaching Hospital and a resident of the Korle-Bu Doctors Flat.

Prosecution said somewhere in October this year, the complainant felt unwell and informed her boyfriend, who is a witness in the case.

Yartey also gave her some medicines to swallow.

Immediately the complainant took the medicine, she began bleeding and was rushed to a nearby hospital and later transferred to Korle-Bu Teaching Hospital.

At the Hospital, prosecution said the complainant was told that the medicine given to her by the accused had caused the abortion.

Later, the complainant reported the matter to the Police and Yartey was picked for investigations.

During interrogation, Yartey confessed to the Police that he was not a doctor but had worked at the Korle Bu Teaching Hospital as a cleaner. 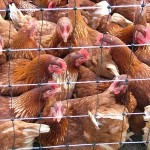