President John Dramani Mahama on Wednesday after giving a brilliant speech at the UN General Assembly in New York, received a massive congratulatory messages from Ghanaians and Un technocrats.

The President during his speech lamented on the Migrant crisis in Africa, especially the challenges some Africans encounter while trying to migrate to Europe via the Mediterranean Sea. He also used the opportunity to court support for the continent.

He then highlighted on the progress made by some African leaders with regards to governance, democracy, technological advancement among others. President Mahama also appealed to developed countries not to force democracy on Africa since it could have adverse effect on the progress of the continent.

After President Mahama’s speech, various people including Foriegn delegation, UN technocrats, MP’s and so on, queued to congratulate the president. 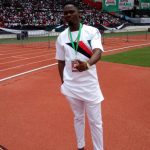