Despite the Electoral Commission’s assurance that the voting process for the special voting will be devoid of mishaps, some electorates who are partaking in this process have indicated that their names are not in the register.

In Klottey-Korle Constituency in the Greater Accra Region, some of the electorates say they have been asked to go to their actual constituencies they registered in to vote.

Citi FM’s Nana Ama Agyemang Asante in a Facebook post said “I registered to vote in the Ayawaso West Wuogon constituency. I didn’t transfer my vote but I opted for special voting. When the special voting list came on Wednesday, my name was on the Klottey Korle list. We were told we could vote in that constituency even though we didn’t register there.”
READ ALSO: Disregard hi-five, look out for elephant – Nana Addo
play

“I turn up this morning at the Osu Police station to vote only to be told I can’t and that I must go back to my original constituency Ayawaso West Wuogon. This shouldn’t be a problem for someone who registered to vote in Accra. I’ll be going to try. But get this, if one is unable to vote today, they won’t be able to vote on Election Day because their bio details will be blocked. So my colleagues who registered to vote outside the city and were given assurance that they’ll not be allowed to vote on Election Day if they are unable to make it today. They will be disenfranchised by the institution that is supposed to protect their ballot. Let me add that, we still don’t know if we’ll be allowed to vote in our original places. And this is just the special voting.”

In Tamale, it was reported that the regional police commander DCOP Ken Yeboah could not find his name in the special voting list.
In Nima, in the Greater Accra Region, the electoral process was halted following confusion at the polling Centre due to some missing names in the voters’ register.

In Agona Swedru in the Central Region, two police officers have been turned away because their names were not on the list.
Many people have raised questions about what will happen during the main elections on December 7 which is barely a week away. 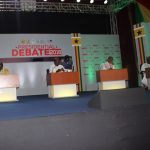