Aretha Amma Sarfo-Kantanka wore a proud African fabric to sort of quicken the bedding in process in this Ghanaian environment.

Her African print too simple to drop a hint that she had a business put together looking for some government attention and answers.

As the founder of Global Fusion Productions Inc and Head of Marketing and Global Branding with KTA Communications Inc, she had come from the United Kingdom to participate in the Diaspora summit.

But that climb-up into planes and climb-down into the Accra International Conference Center was a disaster – according to several participants.

The poster boy of this disaster – Deputy Trade Minister Robert Ahomka Lindsay whose off-the-cuff advice in a typical British accent rubbed off the wrong way.

“Nobody likes whiners, people that spend all the time whining all the time really get on people’s nerves so stop whining,” the Deputy Trade minister said.

He told them that diasporans need to stop whining and shared his own experiences as a returnee who left a well-paying job as vice-president at Coca-Cola Africa to join the first New Patriotic Party (NPP) government formed in 2009.

So as one of their own, he felt comfortable enough to roll out a some forthrightness fried in a foreign accent.

But a fiery response from a participant, Kofi Amankwah, set social media on fire – long enough for the whole exchange to land in the studios of Joy FM for Ghana Connect for a Friday evening discussion of ordinary Ghanaians with host Evans Mensah.

But didn’t Ahomka Lindsay speak the painful truth about returning Ghanaians from the Diaspora who act and complain as if we are all inferior to them?

And by the way how much of a difference can Ghanaians in the diaspora really make to Ghana’s development?

These are the questions for the panelists on Joy FM’s Ghana Connect.

KSM, a returnee who admits his integration from a structured US into a chaotic Ghana several years ago made him a classical whiner. He said he once got so furious, he wanted a class action suit against power distributor Electricity Company of Ghana (ECG).

The host Evans Mensah laughed – a laughter that comprehensively said, “who does that?” KSM laughed too looking back at that the sheer exaggeration of his complaint. Power cuts – no big deal.

Mr Amankwah, a finance expert based in the US, who triggered the whining debate explained his actions. As a sales person, he said he was enthused about the summit after seeing the information online six months ago.

Off to Ghana, he came. But the people who invited him had also gone off to Peduase Lodge to have a retreat with the President.

Kofi was shocked that after advertising a summit for six months, the government would pack off into a hide-out to think about Ghana’s problems when a part of the solution had trooped to town.

“I would have thought these guys would be there and talk to us. Is this the perfect time to have a retreat with the president? come on?” he fumed, notching up a few emotions.

Kofi Amankwah was not happy the moment he got to the venue for the summit last Thursday. The parking lot was full of potholes, he said.

“This is not a parking lot. This is a dusty road”, the integration shock was yet to fully sink into the returnee.

Then he and others queued behind one computer to register for the conference.

Then the only printer broke down midway. The conference organisation had become problematic for him.

Kofi Amankwah became a ticking time bomb waiting for a spark – an Ahomka Lindsay spark. And it came, blowing up the taxpayer funded conference into a public relations nightmare.

Another panelist, Aretha Amma Sarfo-Kantanka, said she came to Ghana because of the ‘one-district one factory policy’. It is a massive industrialisation policy broken down into an ingenious communist slogan that worked wonders at the polls last December.

“I was there because particularly we are one of the first Ghanaian-American companies to be launching a smart phone”.

“And we had met the Finance minister in New York and he encouraged us to come here to go towards the one-district, one factory policy. This is specifically why we came here”.

But an official from the ‘One-district, one factory’ secretariat came for the conference more than an hour late.

She refused to do a presentation. “You know what…All of you ask your questions…before she leaves for another meeting at five o’clock’ Aretha rephrased the official’s words.

Any meeting for a deep discussion about the government’s industrialisation policy would have to wait till next week, Aretha narrated.

“It came to a point one of the organisers was literally fighting with her on stage” to get her to engage the participants, she recalled the spectacle.

Esther Armah, another panelist who is a British-born playwright, radio host and political commentator tore into the government.

She had been living in Brooklyn, New York but packed her bags one day and returned to Ghana.

She is doing well back home and is the host of ‘ The spin the spin’, a talk show, for the African-American Public Radio.

She also lectures at the Webster University Accra Campus. For her, the Deputy Minister completely insulted a business constituency the NPP government is trying to woo.

She led the other panellists to imagine that the audience in the conference were Chinese. Would Ahomka Lindsay speak that way?she quizzed.

The communication expert told of how the summit should have gone.

“This is what should have happened. Welcome Akwaaba. We need you to be here. For anybody who wants to set up a business, we have designated spot”.

“We are going to register 500 businesses today. You are gonna leave this country with your Tax Identification numbers and if you need to set up a business account you can do so in the next four days”

“People came home to do business and they left the country with their business plans, their anger, frustration and feeling disrespected”.

Esther has been in the country long enough to share a political view about how this summit became a mess.

“They have not transitioned from opposition to actually governing a nation. Had they done so, you would never have put a deputy minister for Trade on a mike at a conference of that significance and require him to share his personal experience to Diasporans.

“I don’t care about your experience as a Diaspora. People came for business’. 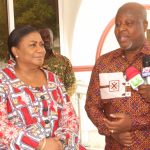