The deal makes the `Skelewu’ crooner the first African to enter into such deal with the international label.

According to a statement from Davido obtained by the News Agency of Nigeria (NAN) in Abuja, the deal will help him to create, distribute and market his music at world class level.

He said the deal was executed by Nigerian-born American Music Executive, Efe Ogbeni (Grace, Red One), who is also a
partner with Nicki Minaj on Parker Ighile‘s project.

Also, it was facilitated by Davido’s manager, Kamal Ajoboye, the brain behind the musician’s sophomore album, “The B.A.D.D.E.S.T.” pushed back in 2015.

NAN reports that details of the new deal was not made public, but the boss of the music label was Honorable Kings of New-school (HKN).

Davido, who is also the Black Entertainment Television (BET) Award winner, also took to his social media pages to celebrate the deal.

He said “thank you God!! I have worked hard all my life for this day! This is the day that the lord has made!!”.

“1st African Artist to sign a global record deal! my story is just starting!! My mother is smiling in Heaven right now. 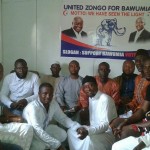