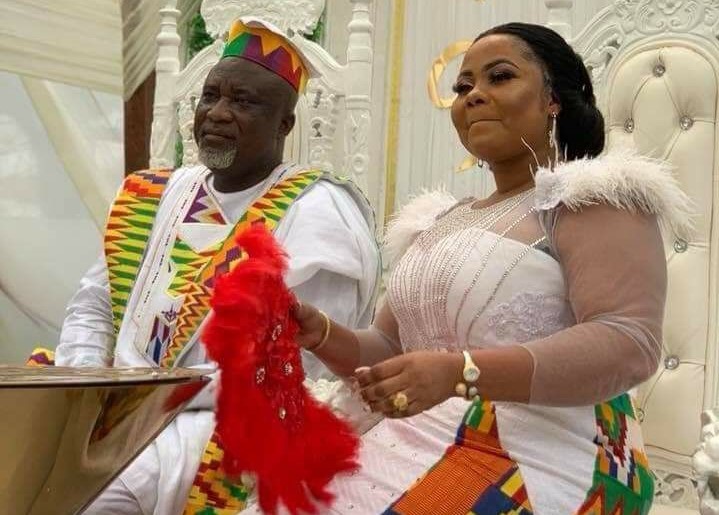 Wife of the sacked head of security at the Kotoka International Airport (KIA), Hopeson Yaovi Adorye, is now being fully protected by operatives of National Security.

Mrs. Empress Gifty Adorye, a gospel songstress, has been spotted in the company of well-built security men, alleged to be coming from the National Security outfit, providing security to the politician’s better half to events she is slated to perform.

It is the first time, the musician has been seen in a video with bodyguards, as she never had that privilege until her marriage to the governing New Patriotic Party (NPP) Communication Team member, who has now been sent back to the National Security, after he was relieved of his post at KIA.

Their uniform was similar to the one worn by operatives of the SWAT unit under the National Security, who took part in the Ayawaso West Wuogon (AWW) by-election gun violence leading to the setting up of the Emily Short Commission, but it is unclear if they had guns on them.

The said event is not readily known, but per what was captured in the short video, Mrs. Adorye, who is well known for her stage craft, walked from the backstage with the three macho men, shepherding her until they reached the stairs then, then they left her to mount the stage to perform, while they waited.

Interestingly, while performing, one of the operatives is spotted walking on the big stage, looking round to ensure that no harm came to the mother of two.

The couple, got married last December, after dating for few months, following the collapse of the singer’s first marriage years ago and the death of Hopeson’s first wife.

The circulation of the video, has shocked and angered many, including people in the NPP, who say but for the fact that the party was in power, the singer would not have been able to get the opportunity to move around with state security.

Though it is the right of Mrs. Adorye to get Police protection, they argue she would not have had these operatives from the National Security, if her husband was not a party member and an appointee of the Akufo-Addo government.

They are worried the image of the National Security, is being brought into disrupt especially in the midst of the Ayawaso West Wuogon brutalities by the same outfit.

Allegedly, excerpts from the Short Commission which was instituted to investigate the AWW by-election brutalities, the activities of the National Security operatives, has been questioned by the commission, as they had made recommendations that their work be streamlined, with some removed for efficient use of resources.

Others who saw nothing wrong, say it is a precautionary measure by the couple. They argue it is important the singer is protected, as in the past the likes of Berlinda Nana AkuaAmoah, popularly known as Mzbel and the likes, have been attacked at shows, because they did not take precautionary measures.

Meanwhile, a member of Gifty’s media team, Stephen Kenneth Nakujah, has rubbished comments to the effect that Hopeson is using his influence in government to abuse the security service.

Reacting to a post on facebook, he said “Ghanaians always want to see this happen before they criticize organizers of failing to provide the artist with security”. He continued after another friend expressed disappointment about his defense saying “Am shocked at you. You see, what I have is to see people compare artistof the past to those of today.

Never try that okay? How many motorcades used to follow Kwame Nkrumah then and what do wesee today? Or you don’t know security of today is much more expensive than previous? And what has my own quotes on fb got to do with providing my artist with security when mounting a sage?

Let’s leave the politics and think logically, if she has been attacked like they did to Mzbel KNUST campus, you would be the same person to criticize the organizers for not providing her with enough security”.