Director of Security at Kotoka International Airport (KIA) VVIP security, Hopeson Adorye has been ousted from office according to credible information available to the Herald.

The appointment of Mr. Adorye, who recently married Gospel Songstress, Gifty Osei, was terminated last week for unknown reasons leaving room for all kinds of wild speculations including claims that his Arabian style wedding with a luxurious Rolls Royce car brought too much embarrassment to the government.
– Advertisement -Photo of the Remarkables mountain range in Queenstown, New Zealand.

The dismissal has led to complains of ingratitude from Mr. Adorye, who is one of the very dedicated NPP youth and credited with many hatched jobs including assault on political opponents in radio studios.

His sacking preceded the booting out of the managing Director (MD) of the Ghana Airport Company, John Dekyem Attafuah and the dissolution of the board through a letter dated 16th January 2019, and signed by the Aviation Minister, Joseph Kofi Adda.

Reason for Hopeson’s sudden removal is not readily available but this papers checks point to certain actions and inactions on the part of Mr. Adorye, who is a communication team member of the governing New Patriotic Party (NPP),

According to this paper’s source within government circles, Adorye’s removal was as a result of the accusation that while serving as head of VVIP section of the KIA, he allowed every “Tom, Sick and Harry” to use the privileged VVIP section, a security zone managed by National Security Secretariat, for their private travels abroad.

According to information, people within the government were said to be displeased with the carelessness with which he discharged his duty at the airport.

There were fears of illegal substances passing through the VVIP section, which could embarrass the image of Ghana, internationally.

The Herald cannot independently tell where Hopeson had his training as far as security issues are concerned but it can recall that eyebrows were raised after his appointment as the man in charge of the world class Terminal Three was made.

There are some who have also alluded to the fact that Mr. Adorye may have angered the powers that be because of the public show of opulence in December when he tied the knot with his now wife popularly known as Empress Gifty.

The engagement and wedding ceremonies, privately held at Tema, was the second marriage for the two after the singers first marriage with a Tema based Prophet, Elisha Osei collapsed few years ago.

The wedding event reportedly cost the couple a fortune.

Aside the aforementioned reasons, there are some who believe that Mr. Adorye lost his job as a result of a story The Herald published few days to the Christmas festivities last year where he was accused of absconding with a Toyota Land Cruiser V8 vehicle, he purchased from car port, a garage company at Kotobaabi in Accra. 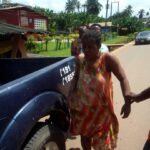 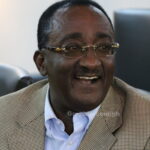