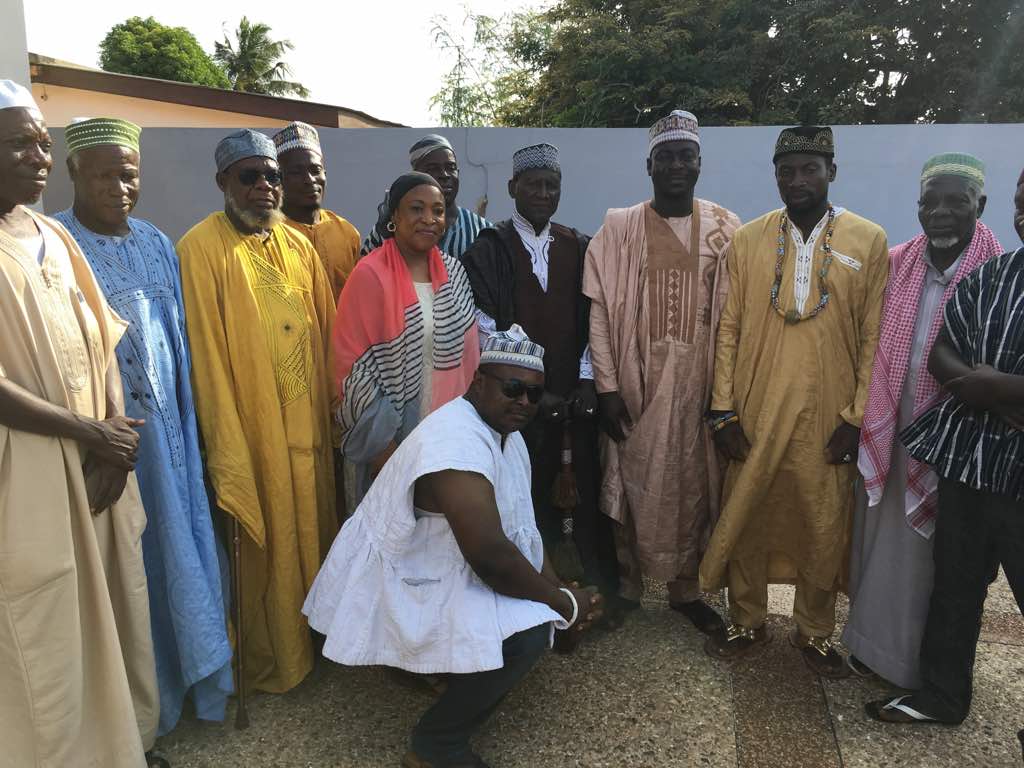 Minister of Foreign Affairs and Regional Integration and Member of Parliament for Anyaa – Sowutuom Constituency, Hon Shirley Ayokor Botchwey, has lauded the formation of a Ga Central Council of Zango Chiefs under the chairmanship and Patron of Chief Sheikh Mohammed Jibril Sissy.

The Minister expressed delight at the formation of the Council and urged the Patron and chairman, Chief Sheikh Mohammed Jibril Sissy who doubles as the Deputy Public Relations Officer (PRO) of the Council of Zango Chiefs and a veteran Broadcast Journalist to foster love, peace and unity amongst chiefs and the people of the Zango community within the Ga Central constituency.

The Council, she said, will be her first point of call when it comes to issues related to the Zango communities in the Ga central constituency.

Hon. Ayokor Botchway made this known when the Chairman of the Council led a twenty-member delegation on a courtesy call to her residence.

The visit, according to the secretary of the Council, Naana Khadija Mohammed, was to outdoor and officially inform the Minister about the activities of the Council which operates within her jurisdiction as the Member of Parliament for Anyaa – Sowutuom Constituency.

The Minister stated that she will also count on the council to play a pivotal role in minimizing the incidence of chieftaincy disputes in the area and promised to first seek the Council’s opinion on all matters regarding the Zangos in her area.

According to Hon Shirley Ayorkor Botchwey, she hopes the Council will also be helpful in the fair allocation of various resources within the Zangos in Ga Central, although her major concerns are the chieftaincy disputes and the deplorable roads within the constituency.

She said there is the need for the Ga council of Zango Cheifs to work assiduously towards bringing peace among chiefs of the area and reiterated the need and desire to meet with the council quarterly to discuss issues concerning the Zango communities in the area.

Chief Sheikh Mohammed Jibril Sissy expressed their heartfelt gratitude for the warm reception given members of the Council and stated that the request by the Minister to work hand in hand with the Council is a step in the right direction, which also falls in line with the objectives of the Council such as joining hands and exchanging ideas with government and other stakeholders to promote development within the respective Zango communities while preserving the cultures and traditions of the people.

Chief Sissy called upon Zango chiefs within the Ga central to collectively work towards peace and brotherliness, adding that the door of the council are opened to all duly installed chiefs in the area who satisfy the conditions of the Council.

The queen mothers and other opinion leaders present at the meeting with the Minister also added their voices to the call made by the Minister for peace among the chiefs and people of the Ga Central Constituency.

The twenty-member delegation which was made up of some prominent cheifs such as, cheif Abdul Jaleel Haruna (sarkin Awoshie) Cheif Abubakar Sidick Bisa Twim-Awoshie A Lang, Sarki Musa Moro (Sarkin Fawa-Ablekuma) among others were received by the minister and some staffers of her office.