The Most Reverend Charles Palmer Buckle, Metropolitan Archbishop of Accra has stated that lesbians and homosexuals are all children of God whose basic human rights must be respected by all.

According to him, the human rights of all gays must not be abused but added that the Catholic Church is against the practice of homosexuality because it is against the law of God and humanity.

“We [Catholic Church] are clear on that, homosexuals, LGBT’s and the rest are children of God and they must be respected.

“They have a human dignity that nobody must be allowed to trample on that,” Archbishop Palmer Buckle told Nii Arday Clegg, host of Morning Starr Monday.

“It is also not only our religious teaching that makes us stay by that, it is also a natural normal logical thing so this is where we are in the Catholic Church and I think we have made it very clear we are not going to condemn LGBTs as personalities…but we definitely say that is contrary to the greater good of humanity for procreation and also for education and creation of people”. 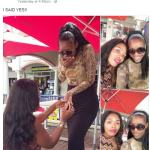