Lawyer for some of the judges indicted in the judicial scandal has chastised Ghanaians for what he describes as their “holier than thou” attitude on corruption describing them as hypocrites.

John Ndebugri said he is getting fed-up with this behavior.

The lawyer was speaking in response to the widespread condemnation of the judges caught on camera taking bribes by investigative journalist, Anas Aremeyaw Anas.

The scandal has ignited a massive public outcry with many people calling for the video to be made public to shame the alleged corrupt judges.

Speaking on Eyewitness News, lawyer John Ndebugri argued that such people agitating for the video to be made public and those showing it are being “lawless.”

“Nobody is more patriotic than the other in this country. Even those who are even corrupt are going around claiming that they are the most patriotic people. Let us go into everybody’s closet and see whether they are clean; there would be a lot of cockroaches. I am getting really fed-up with this grandstanding and this holier than thou attitude.”

Meanwhile one of indicted judges, Justice Paul Dery has sued a number of companies who showed the video including UTV, AICC and the Global Cinemas for contempt.

According to Ndebugri, “those who are claiming that they love Ghana so much that they must show the video” are not being fair because “you cannot accept the right and reject the responsibility.”

“Why do you adopt the other part of the constitution and you have rejected article 146 (8) even when the supreme court has pronounced on it. What is the meaning of that if it is not lawlessness and grandstanding and hypocrisy of the highest order?” he questioned.

He again cautioned institutions showing the video to refrain from it. 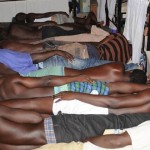