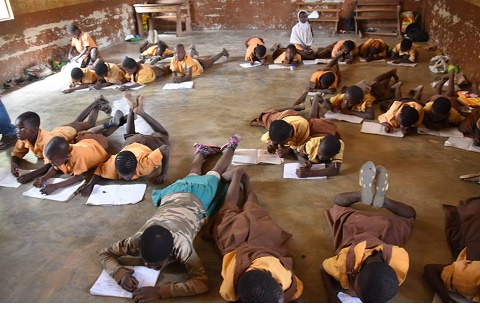 Headmistress of Kperisi M.A. Primary School, has said she is not a politician and did not invite journalists out of malice into the school to disgrace the Wa Municipal Chief Executive (MCE), Alhassan Nuhu Putiaha.

According to the headmistress, Rosina Diedong, the Municipal Director of Education called her asking her to apologize for bringing journalists to the school to cover pupils who laid on the bare floor to write.

Diedong said she was told that she didn’t take permission from the directorate and that has brought the name of the school and the municipality into disrepute. She has denied calling the media to the school.

Kperisi M.A. Primary School in the Wa Municipality of the Upper West region made the news yesterday after Joy News’ Rafiq Salam reported that the pupils were lying on the bare classroom floor to write because they don’t have furniture to sit on.

The Headmistress said the pupils don’t only get waist pains as a result but they also catch a cold which always land them in the hospital.

Diedong said she granted the interview without malice and spoke because she wanted to reach out to government and other benevolent organizations.

The Headmistress was emphatic she is neither a politician nor doing the bidding of any political party.

“If it is an apology letter they want I will write it to them on Monday. I don’t fear being transferred out of the school. Even if I leave and the children have the furniture I will be happy,” Diedong said.

However, the Wa Municipal Chief Executive has denied asking the Kperisi headmistress to apologize.

“Since the news broke I have not spoken to her or asked anybody to speak to her. I am surprised of hearing this,” the Wa MCE added.
myjoyonnline.com