I mean no disrespect to Nana Akufo-Addo in my direction to him to “shut up” owing to the fact, when the trumpet is blown to assemble those who relish in tribal and discriminating politics against Northerners, then Akufo-Addo and his contemporaries come second to none and inimitable. Akufo-Addo has shown an unbridled abuse of Tribalism and Discrimination most especially against Northerners , not from anywhere but in his own party.

Let me take you through some lessons of history of this Dankwa-Dombo-Busia tradition which I chose to call it Dombo-Busia tradition based on available evidence and not on “PATAPAA” mentality of some “condescending Kyebi” family. After the abysmal performance of the UGCC led by Dr Joseph Boakye Dankwa in the 1951 elections, it is said that, as time went by, the UGCC began to wither until it became extinct and unnoticeable defunct before the next general elections in 1954. It is worth noting and in reference to the banner headline of the Daily Graphic Newspaper on one fine Thursday, day of August 12 1954, it reads “NPP IS THE OFFICIAL OPPOSITION PARTY.” It further stated the following in that story reported by Kofi Ahorsey “A ruling By the speaker Sir Emanuel Charles Quist at the legislative assembly yesterday that “THE NORTHERN PEOPLES PARTY HAD A RIGHT TO BE REGARDED IN THE HOUSE AS THE OFFICIAL OPPOSITION PARTY”, this brought to an end the dispute between the NPP and the government over the problem of recognition.”

Subsequently, after Dr Kwame Nkrumah had promulgated the ” Avoidance of Discrimination Act, in 1957 which debar the foundation of political parties on tribal, religious and ethnic lines, an opportunity to politically annihilate Dr Kwame Nkrumah was identified in the need for all opposition parties to come together under one umbrella. Hence, the National Liberation Council which was an ethnic Asante party but had lesser number of seats and of course Four, at the assembly joined forces with the Northern Peoples Party which had majority of thirteen seats at the assembly, together with the Muslim Associations Party, Ga shimotey, Anlo Peoples Party and the UGCC to form the UNITED PARTY. Northern Peoples Party was led by Chief Simon Dieodong Dombo, NLM led by Baffour Akoto, UGCC led by Dr JB Dankwa. Truth be told; Dr JB Dankwa’s UGCC as at that time was extinct beyond recognition. In fact the UGCC had zero or if you like NO REPRESENTATION at the assembly as at the time of the formation and rebirth of the Tradition because,  Dr JB Dankwa had loss the elections on the Abuakwa seat to his cousin Aaron Ofori-Atta who contested on the CPP ticket. This means, Dr JB Dankwa was of no use in the alliance that culminated in the formation of UNITED PARTY, UP.

Permit me to veer of, for want of space, to relate the historical antecedents of the tradition to what it is today, albeit in a cascading manner. The moment, news got to Akufo-Addo and his cohorts that, a Northerner has risen from a place, of course where Akufo-Addo loathes, and shown an unadulterated desire to contest the highest position in the NPP- National Chairman, with the sole intent of rescuing the NPP from the doldrums of eight years of political darkness; it indeed, sounded like a knife, striken on their hearts. They began to do all they know best, plotting evil. First, After our brother chairman Afoko picked nomination forms to contest that election, discordant voices from Akufo-Addo’s Kyebi Family suggesting his disqualification began to rear its ugly head.

Because Akufo-Addo have always viewed Northerners as second fiddles and reserves for deputy and vice Positions, it was highly treasonable, mutinous and offensive to Akufo-Addo’s believes, for a Northerner to express his desire to seek the highest office in the party, ie, National Chairman. What did Akufo-Addo do to stop the first Gentleman and Northerner chairman Paul Afoko from climbing the tallest order in the party which of course was a violation to Akufo-Addo’s primordial believe? First , they smeared the pleasant Northerner Chairman Afoko with outright lies and slanderous allegations. When it didn’t work for Akufo-Addo, Akufo-Addo instructed his surrogate and a fellow “Akyem” Most Reverend Asante Antwi who was the vetting committee chairman to consider petition full of groundless and frivolous allegations from faceless strangers. For the first time in NPP, Akufo-Addo and his surrogates sentenced the Northerner Chairman Paul Afoko to as far as INTERPOL to have his name cleared from the lies they have smeared against him. As was captured in African watch magazine’s 2016 April edition, INTERPOL replied NPP saying “The subject you referred to us, Paul Afoko, is not known to any police force.” Chairman Afoko says “that was simple and straightforward, meaning I have no criminal record. I had never been arrested!” Yet the Akufo-Addo inspired Vetting Committee would not clear the Northerner Chairman Afoko, only doing so grudgingly at last. Afoko says he then asked for the name of his accuser. Earlier, the Vetting Committee had refused to disclose the name to Afoko, saying the onus was on him to prove his innocence rather than to know whom his accuser was. Now that Interpol had cleared him, the Committee was more forthcoming to disclose the name to him. But Afoko says: “They gave me a single sheet of paper, a mockery actually, because it was a plain paper with two paragraphs on it purported to be the petition they received, and a name at the bottom. It was the kind of thing where you will never know who that person is because it wasn’t a true name. And there was no address. Nothing! Laughable!” 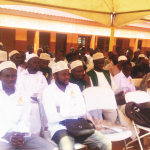