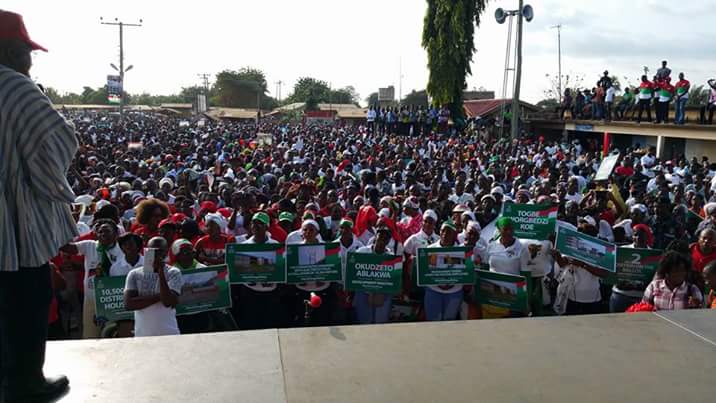 On Friday November 3rd 2017, a Deputy Minister of Communications in the Akuffo Addo/Bawumia Govt – Hon Vincent Sowah Odotei officially commissioned and handed over an Enhanced Community Information Center at Nkoranza in the Brong Ahafo Region and categorically stated that *”the construction of the e-CICs is driven by the vision of H. E. Nana Addo Dankwa Akuffo Addo to promote the use of ICT for the Country’s development “* which is an outright lie. Again, on Tuesday 7th November 2017, another Deputy Minister for Communications in the Akuffo Addo/Bawumia Govt -Hon Nenyi George Andah also commissioned and officially handed over two of the eCICs to their respective assemblies at Elmina (in the KEEA Constituency) and Gomoa Aboso (in the Gomoa Central constituency) *without acknowledging the previous Govt when it is public knowledge that the eCICs was initiated, built and completed by the John Mahama/Amissah Arthur Govt before exiting power.* It has therefore become necessary to set the records straight and also to admonish officials of the current Govt of Akuffo Addo/Bawumia to be honest in their public dealings and also learn to give credit where it is due.

Expanding infrastructure was a cardinal point of the NDC Govt of H. E. John Dramani Mahama so while the Govt under his leadership continued to build more hospitals, schools etc, other critical sectors such as roads, water, transport, ICT, telecommunications, agriculture etc also had it’s fair share of attention because President Mahama’s Govt believed that development of key infrastructure is not only for job-creation but also for the general socio-economic transformation of the Nation.

The ICT sector in Ghana under *President Prof Mills and President Mahama* contributed greatly to Ghana’s economic growth and *between 2013 to 2016,* Govt made further strenuous efforts to leverage this for rapid socio-economic development by initiating and completing many far reaching interventions to further develop that sector. Some of these interventions are the National Data Center, the Business Process Outsourcing Center, the Eastern Corridor Fibre Optic, the e-Transform Ghana Project, the ICT for all programs, the Enhanced Community Information Centers (e-CICs) and many other initiatives.

In furtherance of the commitment of Government to use the medium of ICT to promote an all-inclusive information and knowledge-based society to benefit the under-served and unserved communities, President John Mahama’s NDC Govt continued to promote the Community Information Center concept and in 2014, utilizing part of the savings from a Value-for-Money Audit of the e-Government Platform Project, the Ministry of Communications under the leadership of *Hon Dr Edward Omane Boamah*, commenced the construction of several Enhanced Community Information Centers (e-CICs) in all the ten regions of Ghana; in addition to over 40 CICs and nine Regional Innovation Centers initiated & completed previously.

The Central Region was not left out of the allocation and had her fair share of the construction of these CICs and e-CICs in various locations such as Gomoa Afransi, Yamoransa, Gomoa Pinanko, Elmina, Gomoa Aboso, Agona Mankron, Twifu Praso and other areas. Interestingly, the NPP from top to down pooh poohed the existence of these laudable projects and described same as non-existent or Photoshop. Is it not interesting that the very NPP functionaries who pooh poohed the projects when in opposition and are now Govt officials, are criss-crossing the length & breadth of our Country commissioning the completed projects of the previous Govt that they described as Photoshoped? One would have even thought that they will be humble and honest enough to apologize for their campaign excesses with respect to such projects which is critical to National development and also credit the previous Govt for the initiative and construction and not to dabble in dishonesty by crediting the projects to H. E. Akuffo Addo like Hon Vincent Odotei did when the NPP Govt of Akuffo Addo/Bawumia knows next to nothing on the e-CICs.

What baffles many in Gomoa Aboso is the fact that *Hon Rachel Appoh* who played significant roles to ensure that her constituency benefited from two of these projects at Gomoa Afransi and Gomoa Aboso was not invited to the commissioning or even mentioned during the handing over but rather the NPP MP for Gomoa Central who used issues surrounding the construction of the Gomoa Aboso e-CIC to win votes in Gomoa Aboso, Gomoa Ekroful and Gomoa Benso and scores of NPP DCEs were invited to commission a *John Mahama/Rachel Appoh* project. Have they forgotten the vile propaganda they spewed concerning the facility so soon? Well, it is good that many facilities built, completed and refurbished by the *NDC Govt* are being put to use but we strongly admonish officials of this NPP Govt to give credit where credit is due. Enough of the Politics of Dishonesty.