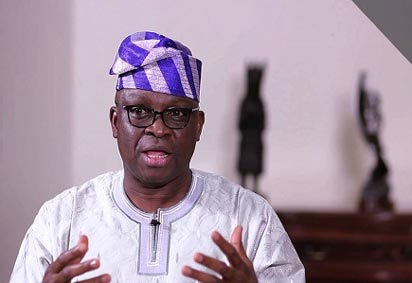 Governor Ayodele Fayose of Ekiti State has said that the Federal Government must do more than just talking about whether or not the Halliburton and Siemens corruption scandals, will be reopened, adding that President Muhammadu Buhari should disabuse the minds of Nigerians who believed that his fight against corruption was selective and political by going ahead to try those indicted in the Halliburton and Siemens scams.

Governor Fayose, who commended the Federal Government for saying that the case was not dead, said it was not enough to tell Nigerians that a
case like the Halliburton and Siemens, in which many people have been jailed in other countries, especially the United States and investigations concluded in Nigeria with those alleged to be involved questioned by the Economic and Financial Crimes Commission (EFCC) was not dead. Rather, those already found wanting should be prosecuted.

Speaking through his Special Assistant on Public Communications and New Media, Lere Olayinka, the governor said; “As it still appears, the statement made by the Federal Government on the Halliburton and Siemens corruption scandals may not be more than another decoy to shift the attention of Nigerians from the selective nature of President Buhari’s fight against corruption.”

The governor described the publicised arrest of President Buhari’s associate and All Progressives Congress (APC) Chieftain, Jafaru Isa, and his reported refund of N100 million to the EFCC as the first trick used by the Federal Government in its attempt to deceive Nigerians into believing that the fight against corruption was not selective.

“Like I have maintained, I do not buy into the EFCC story of Jafaru Isa’s refund of N100 million because it raises more questions than answers and I am also seeing this talks by the Federal Government about reopening of the Halliburton and Siemens scams as an aftermath of the failure of the Jafaru Isa’s stunt to achieve the desired result.

“This is because unlike the arms deal that the EFCC is investigating, the Halliburton and Siemens scams have been investigated both in Nigeria and in the other countries. None of the top Nigerian culprits implicated in the $1.5 billion bribery scandal had been questioned and put on trial in Nigeria while others from other countries were already serving various jail terms.

“Therefore, reopening the Halliburton and Siemens scams should be immediate and total. It should not be another decoy to deceive Nigerians by giving the impression that the anti-corruption war is not targeted at those opposed to President Buhari in the Peoples Democratic Party (PDP) and his own party, the APC.

“Also, the president should go a step further by directing the EFCC to investigate the many petitions written against those who financed his election and other chieftains of the APC, including Ministers serving in the government presently.

“Until those alleged to be involved in the Halliburton and Siemens scams and those who financed the President’s election with public funds are charged to court, Nigerians will be right in believing that the fight against corruption is only an instrument of settling political scores.”