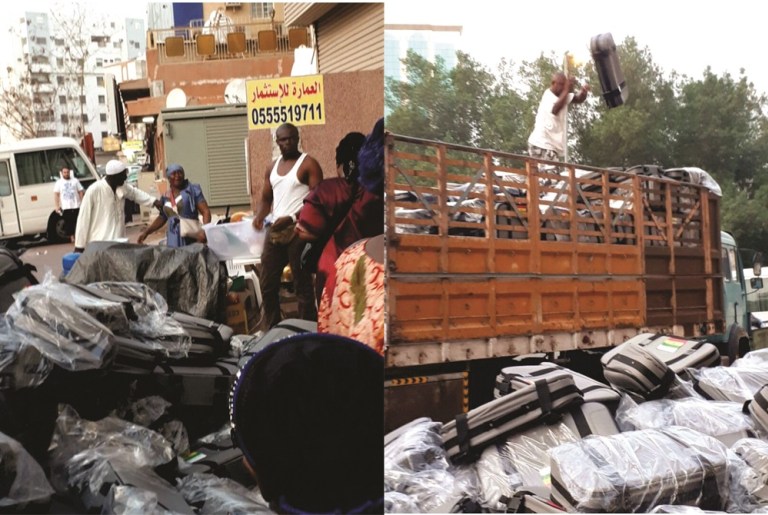 The messy eyesore that became of this year’s Hajj pilgrimage is finally receiving an anticlimax of shame, as activists of the ruling New Patriotic Party (NPP), who were appointed into a Hajj taskforce, openly manhandled pilgrims returning from Saudi Arabia.

The unbelievable addition of insult to injury has seen the bags and baggage of some Muslim pilgrims vandalized by violent NPP activists in the Hajj taskforce, impatient to get pilgrims and their needs off their hands.

A video capturing a scenario in the saga shows one popular NPP activist, called Bashiru Red, pouncing on an angry pilgrim and attempting to bludgeon her with a mini-gas cylinder, even as portmanteaus, belonging to pilgrims, are hurled from a truck into a jumble on the ground.

The video, which has since gone viral, has drawn a lot of anger in the country, especially, within the Muslim community.

As just a scenario from a messy fiasco that became of the first ever Hajj pilgrimage under the ruling NPP, the manhandling of the pilgrims returning from Mecca follows a long list of mishaps that pilgrims suffered, including bumming in Saudi Arabia.

The NPP government, whose Muslim Vice President, Mahamudu Bawumia, had inaugurated this year’s pilgrimage with pomp, ended up turning the religious exercise, which had been pleasurable under the predecessor NDC government, into a nightmare.

Delay in the arrival of the flights of pilgrims had seen them suffer bumming at the Tamale Airport, where they had slept through mosquito-infested nights in the open amidst insanitary conditions.

Eventually, after pilgrims had reached Saudi Arabia, poor arrangements had seen them stranded on street corners, braving elements of the weather in makeshift sleeping places just to undertake the important Islamic ritual of Hajj.

Some unhappy pilgrims, who had been part of the victims, recorded their ordeals in the streets of Saudi Arabia, showing how our countrymen and women had been forced to huddle like bums on street corners in Saudi Arabia, and posting them on social media.

Interestingly, the ordeals by Hajj pilgrims this year had been in spite of the fact that the NPP government, led by President Akufo-Addo and Vice President Bawumia, had scrapped a subsidy that the erstwhile NDC administration had instituted to cushion Moslems from the cost of the pilgrimage.

The video footage, which shows some of the pilgrims being manhandled, also shows how their bags are angrily jettisoned from a stationary truck by people who are not mindful at all that they could damage people’s property.

An angry woman, who had reacted by threatening to hurl a mini- gas cylinder at one of the perpetrators was set on and nearly bludgeoned with the mini cylinder by an angry male Hajj taskforce member who had overpowered her.

That taskforce member is said to be one Bashiru Red, a popular activist and loyalist of the ruling NPP.

He is said to have angrily pounced on his victim because the Hajj taskforce members are angry with this year’s pilgrims who they accuse of recording the videos about their ordeals and posting them on social media.