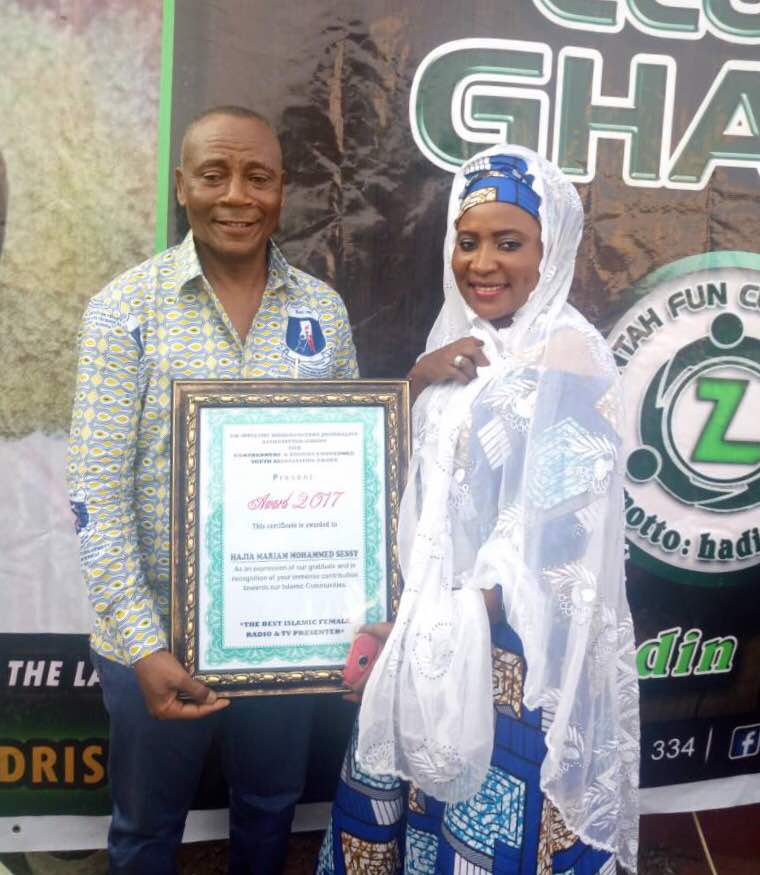 This came to light during the launching of Zumunta Club, Ghana and the dua (prayers) for the late Philanthropist Alhaji Adamu Global Haulage at Nima- Red Carpet a suburb of Accra.

The event brought together chiefs from various Muslim communities in the Greater Accra Region.

Hajiya Mariam Sissy a trained International Broadcaster and the Deputy Hajj Communications Director was the only female recipient among the awardees, others honored includes Hon. Abubakar Sidick Boniface, Minister of Inner Cities and Zongo Development, Alhaji Bala Maikankan, the Director of Zongo Television.
Hajiya Mariam Sissy is also a Presenter and the hostess of Adult Education in Hausa on Ghana Television GTV, the Unique Muslim News presenter of Ghana Today on Radio Ghana, a Producer of Ku Falka on Unique FM and Assistant heard and senior Editor of Hausa section of the Ghana Broadcasting Corporation (GBC).

In an interview with the media, Hajiya Sissy revealed that she started as a Biochemist working with the Kole-bu Teaching Hospital with good monthly salary but decided to join the media fraternity as part of her passion to speak for the voiceless in the Muslim society.

According to her, her passion of speaking for the voiceless in the society has yield positive results and have successfully made positive impact on her community. she has became a remodel to many in the Muslim communities and the country at large.

She stated that, there are many issues within the Muslim community that need to be attended to, adding that Education, entrepreneurship, skills development are among other key areas that need to be addressed due to the dichotomy they have with Development of the Zango people and as well improve their living standards.

She advised parents to channel their resources and energy in educating the girl child to ensure that the Muslim communities develops with many sons and daughters in the academia , adding that it is necessary for parents to give their children quality education at all cost because that undoubtedly will eradicate poverty in Zango community.
She stated that spending lavishly on weddings, naming ceremonies, expensive cloth should not be the way to go for now, as it will definitely affect their finances since some go for Loans which obviously would be a hindrance when it comes to giving their children the best of education . She quickly added that there has been some improvement in the area of educating the Muslim youth but there are still some grey areas that need attention.
She further advised children to take their studies serious to motivate their parents in investing in their education. This she said would regenerate the likes of Vice President Dr. Bawumia, Former President John Dramani Mahama, the second lady Samira Bawumia and among other high profile personalities who have made it to the top, “thanks to a decision their Parents took to Educate them some years back” she noted.