The much talked about audio recordings that captured some four persons conspiring to blackmail and extort money from Black Stars Captain Asamoah Gyan has finally been played in court.

At the last adjourned date, the trial judge, Ms Afia Agbanu Kumador ordered the manager of Asamoah Gyan, Samuel Anim Addo present means and play the tape that has been tendered in evidence.
The voice recording purportedly captures Osafo Anthony, a journalist, Musician Ekow Micah and the other accused persons—Sarah Kwablah, student, 21 and 24-year-old Chris Handler, a blogger—conspiring to extort money from Anim.
Kasapa Fm’s court correspondent, Daakyehene Ofosu Agyeman reported that a big speaker and a music player were presented to the Accra Circuit court by manager of Asamoah Gyan.
The tapes were four different conversations with the first between Osarfo Anthony and Ekow Micah talking about a new story about Asamoah Gyan that they must feed on it.
The second tape was between Osafo Anthony, Ekow Micah and Sarah Kwablah talking about the fact that Asamoah Gyan’s Chinese team been worried about the rape scandal.
Osafo Anthony and Sarah Kwablah speaks going all out with another publication since Anim Addo is refusing to compensate them.
The last tape is Osafo Anthony and Chris Handler talking about Anim Addo agreeing to pay them Gh 15, 000.

The four are standing trial for allegedly extorting GH¢25,000 from Anim Addo by means of threat.

Anim Addo had earlier told the court that the accused persons had threatened Asamoah Gyan, the Black Stars Captain, with evidence of text messages to defame him (Gyan) and subsequently follow it with a publication of a sex video if some monies were not paid.

According to Anim Addo, Sarah was the first to threaten and he reported the case to the Odorkor police.

Anim Addo said Osafo, as a result, demanded GH¢30,000 and threatened to publish more stories if the money was not paid.

He said the police asked him to feign interest in the payment of the money, stressing that he met Osafo at an agreed venue and paid GH¢10,000 cash and a cheque of GH¢15,000. The journalist was immediately arrested on receiving the money.
Mrs. Afia Agbanu Kumador adjourned the case to February, 15 for further cross examination. 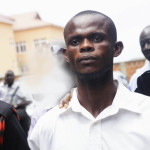