Former president of the Republic of Ghana, John Agyekum Kufuor, has lauded the exploits of Black Stars skipper Asamoah Gyan, touting the striker a “legend”.

Gyan, 30, has been a regularly figure in the national set-up since his debut against Somalia in a Fifa World Cup qualifier in 2003, going on to represent the likes of Italian sides Udinese and Modena, French side Rennes, English Premier League outfit Sunderland, Al Ain of the United Arab Emirates and currently Chinese club Shanghai SIPG.

“It isn’t everybody that has been endowed that gives back but Gyan has been giving back, not only through football but also through music, dancing and entertainment,”Kufuor said at the unveiling of the striker’s music band, the Asa Band.

“Gyan has obviously given a lot back not only to Ghanaians but also to the world at large.

“Go to Britain, he has made himself a legend there; go to the Middle East, he’s a legend; go to China now, Asamoah is a legend and he’s also the captain of our Black Stars.

“He spreads happiness wherever he is and I bless and wish him a happy and prosperous New Year.”

A boxing promoter and the current all-time top scorer of the Black Stars with 48 goals, Gyan also stands as Africa’s highest goal scorer at the Fifa World Cup with six goals over three tournaments. 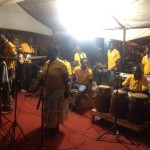