Deputy Finance Minister, Abena Osei Asare has lashed out at the members of National Association of Graduate Teachers (NAGRAT) describing them as a bunch of unfaithful people.

She expressed shock over what she believes is a deliberate attempt by the leadership of the association to throw dust into the eyes of Ghanaians with their claim that government has failed to honor its promise of paying them their six years’ salary arrears.

According to her, she is saddened NAGRAT could go ahead and declare a nationwide strike when the government had already advanced payment for the arrears in question.

“We have paid the arrears from 2010 just yesterday. And NAGRAT is aware, GNAT and other teacher Unions are aware and so if for any reason NAGRAT doesn’t understand they should have consulted GES, Ministry of Education and Ministry of Finance but they didn’t do that and they want ahead to declare a strike.”

Hon. Abena Asare who accused NAGRAT of betraying the trust of all the stakeholders said; “Of all the teacher unions NAGRAT has been unfaithful to the agreement we all had as stakeholders”

NAGRAT at a press conference addressed by its Deputy General Secretary Eric Angel Carbonu accused the Finance Ministry and for that matter government of broken its promise to settle arrears due their members as far back as 2013.

Carbonu who further accused the government of frustrating NAGRAT members issued a directive to their members to stay home when school reopens on April 16.

But speaking on Oman FM’s national Agenda show monitored by MyNewsGH.com on Thursday, Abena Osei Asare, wondered why NAGRAT will quickly go to the media when they know that the arrears had been paid.

“Why is that with all teacher Unions only NAGRAT is behaving this way. Is it that they are engaging in propaganda and throw dust into the eyes of public or what” she quizzed. 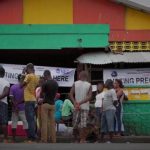