They also received drinks and biscuits from government officials to make the day a memorable one.

Deputy Regional Minister Dr. Musheibu Mohammed-Alfa who led the team described the turn out as encouraging.

My First Day at School is a special day for children who go to school for the first time in their lives.

In view of this efforts are made to make the day a memorable one for the new entrants.

The officials spoke to the new entrants and the old students about the importance of education and the need to be regular in school.

Dr Mohammed-Alfa told the children that if they want to be successful in future they should take education seriously.

He cautioned female students not to do anything that will jeopardize their education.

He said teenage pregnancy is one of the practices that impede the education of girls and advised students at the upper primary to stay away from the practice.

She indicated that Jirapa alone has received one thousand six hundred uniforms while the rest are distributed to other districts.

She commended the Jirapa District Assembly for providing biscuits and drinks for the children while encouraging the children to be regular at school. 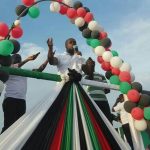