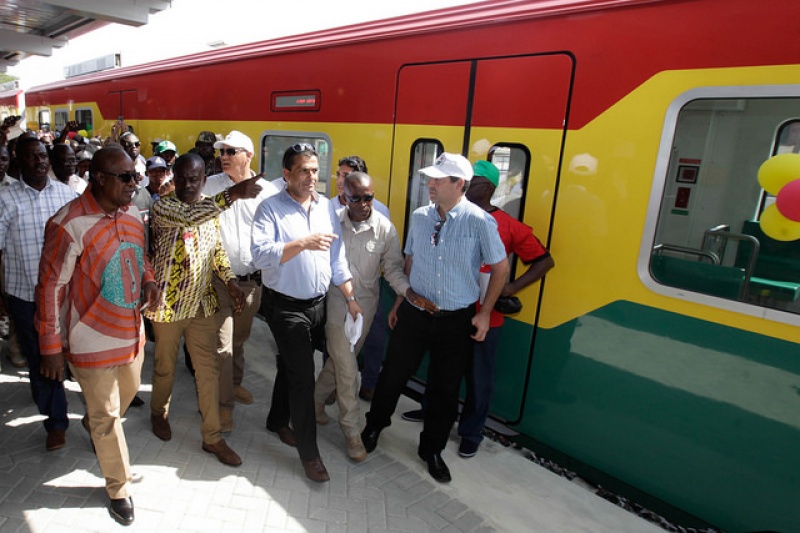 Minister of Railway Development, Joe Ghartey, has disclosed that, government will need $7 billion to revamp the railway sector within the next four years.

He said the ministry has received a lot of inquiries from both local and foreign investors on how they could partner the government to turn the fortunes of the railway sector around and gave an assurance that the government will be transparent in all the processes to make the sector a viable one.

Mr. Ghartey, who is also the Member of Parliament (MP) for Essikado-Ketan in the Western Region, made this known when he met members of the Railway Workers Union (RWU) on the premises of the Ghana Railway Company Limited (GRCL), popularly called Location or Bottom Tree, in the Sekondi- Takoradi metropolis last Saturday.

According to him, the estimates in the Railway Master Plan indicates that the government will need investment of about $7 billion to undertake the construction of the Eastern Line from Accra to Kumasi, the Western LIne from Takoradi to Kumasi and the Central Spine from Kumasi to Paga with two branch lines from Kumasi to Nyinahin where there are bauxite reserves and Tamale to Yendi, areas where significant iron ore reserves could be found.

According to Mr. Ghartey, all these lines totaled about 1,400 kilometres.

He appealed to workers of the GRCL to rally behind the government to salvage the sector.

He said an Israeli company will soon arrive in the country to conduct an assessment of railway facilities in the Sekondi-Takoradi metropolis.

Mr. Ghartey said he has a huge responsibility to build on the existing 947-kilometre railway line which the colonial government bequeathed Ghana.

He said expansion and extension work will be carried out at Nsuta in the Western Region, where manganese was being mined, while efforts were made to reach Paga.

“We have to build new lines alongside the existing ones because you don’t collapse your friend’s house to build yours. This is our last chance under the New Patriotic Party (NPP) government, led by Nana Addo Dankwa Akufo-Addo, and I, as the sector minister, to get Ghana railway back on track,” he stated.

Mr. Ghartey also disclosed that the ministry had acquired about 2,000 acres at Ejisu in the Ashanti Region as part of plans to control the Boankra Inland Port to earn revenue for the company.

The minister noted that just as the Ghana Airports Company Limited made revenue from lands surrounding its operational area, the GRCL could equally do same to secure income, saying, “We need to give out our lands to developers to earn revenue.”

“We are going to make sure that everywhere railway passes there is economic development, instead of the proliferation of kiosks on our lands which do not help us in any way,” he said.

The Managing Director of the GRCL, John Essel, said the company continued to witness fluctuations in its performance, saying that in the first quarter of 2017, it exceeded its target in manganese haulage by 24 per cent.

He however, pointed out that, the April and May tonnage fell by 38 per cent due to rampant derailment on the onset of the rainy season and that drastically affected its revenue.

“Our rail lines are old, Honourable Minister. We believe that with our quest to repair the line from Kojokrom to Tarkwa, we will be taking a step further in capturing passenger traffic in that corridor,” Mr Essel appealed.

For his part, the General Secretary of the RWU, Godwin Ntama, appealed to the government to look for a loan to connect Tarkwa and Paga with a rail line, adding that the workers are ready to work with him as the newly appointed minister for the sector.

Turning attention to his fellow rail workers, he said: “We are thinking about the future of the company and so there is the need for committed people to do the job. So work hard to justify your inclusion and stop the stealing and pilfering, which do not augur well for us.”