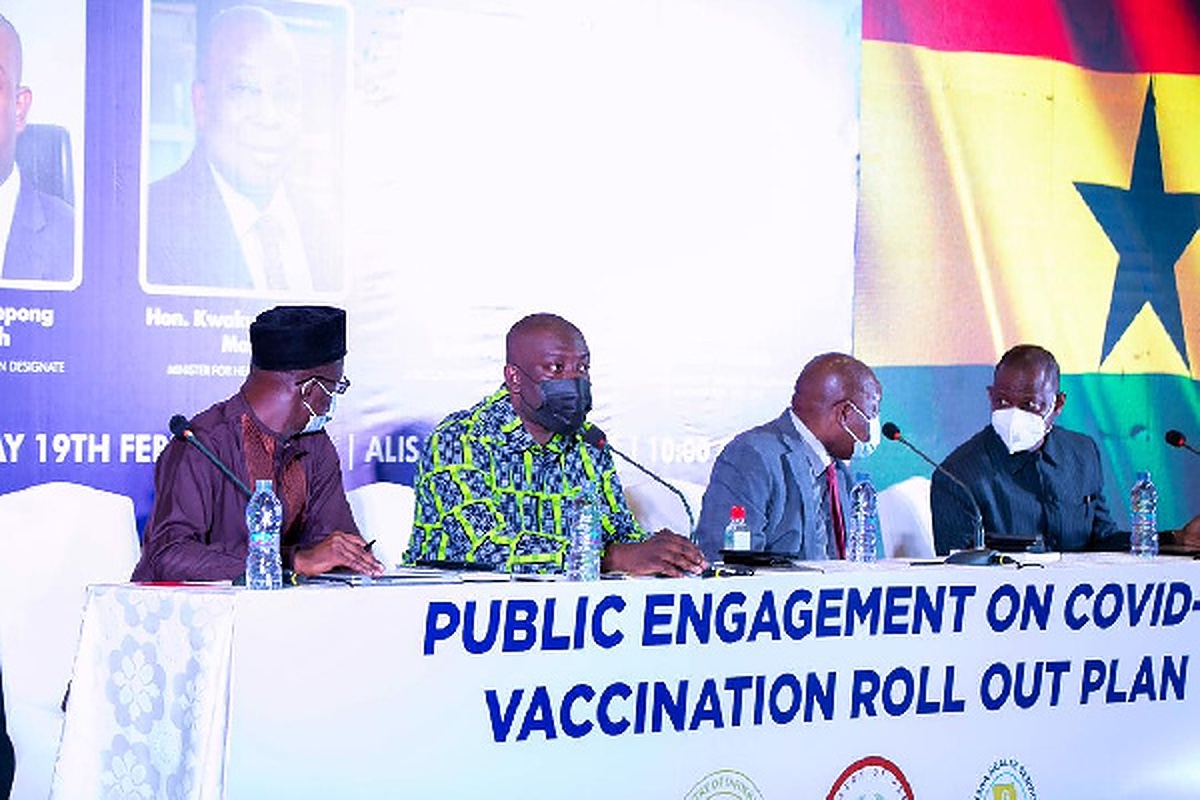 The government has given assurances that the procured COVID-19 vaccines have an impressive efficacy rate and is completely protective against severe cases of the virus in the country. This follows last December’s announcement by President Akufo-Addo that preparations are afoot to secure COVID-19 vaccines for the country.

He said “as you have followed in recent weeks during the President’s addresses, Ghana is been working on a vaccination roll-out the programme and has been working to determine which vaccines, when, what quantities, what are the segments of the population, what is the cost to countries who receive the vaccines among others. Today, we are in a position where we can formally inform the nation of where we are on this journey

He acknowledged that the engagement was important particularly to help cure the long-held misconception by some sections of the public that vaccines are harmful and should not be administered. He said it is important to take inputs from stakeholders in order to demystify this long-held misconception and to further engage them on the roll-out of the vaccines hence, the need for the forum.

The forum was attended by the Minister-Designate for Health, Kwaku Agyeman-Manu, Director General of the Ghana Health Service (GHS) Dr Patrick Kuma-Aboagye, the Programme Manager of the Expanded Programme on Immunization of the GHS, Dr Kwame Amponsa-Achiano and an Immunologist and a Research Fellow at the West Africa Centre for Cell Biology of Infectious Pathogens, University of Ghana, Dr Yaw Bediako.

The Minister for Health Designate, Kwaku Agyeman-Manu who also addressed the gathering emphasized that the vaccine could not have come at an appropriate time than this. He said given that the country is going through a second wave with severe cases of the virus, the arrival of the vaccine will help prevent further infections and help eradicate the virus totally.

“The only thing that we need to add is the prevention mechanism which is vaccination. The world had rushed through to develop vaccines which are quite unusual because of scientific reasons but because of urgency and emergency situation, the pandemic that is afflicting the whole world, they managed to get us something to use. WHO will always tell you for universal health coverage, no one needs to left behind and therefore Ghana will not be left behind. A lot of things have been done, we have had stakeholder engagements with a lot of groups and we will continue to hold same to try to see how all of us will buy into the vaccination programme,” he noted.

Detailing the importance of vaccines in eradicating the virus, Dr Kumah-Aboagye underscored the effectiveness of the procured vaccines particularly in countries that have immunized sections of their population. He noted that the rate of community transmission of the virus in the country though stable is relatively high with several identified hotspots. However, he said the rolling out of these vaccines will help break the chain of transmission in our communities.

On his part as the Programme Manager, Dr Amponsa-Achiano outlined major components of the vaccination roll-out plan. He said the rollout plan is a product of several engagements, commitments, work sessions, reviewing available documents and guidelines with development partners. He noted that the rollout will be based on segmentation. He said ultimately, the government is considering vaccinating the entire Ghanaian population but it is targeting an initial 20 million of which starting with health workers, persons with underlying health conditions, persons above 60 years, security personnel among others.

Touching on the health benefits of vaccines, Dr Bediako said vaccines train the immune system to create antibodies just as it does when it is exposed to a disease. He emphasized that vaccines use the body’s natural defences to build resistance to specific infections and makes the immune system stronger which helps protect people against harmful diseases before they come into contact with them.

I don’t have details of 3.8 million jobs NPP govt created – Employment Minister swears to Parliament
I campaigned, voted for Akufo-Addo because he is ‘far better’ than John Mahama – Allotey Jacobs reveals
To Top