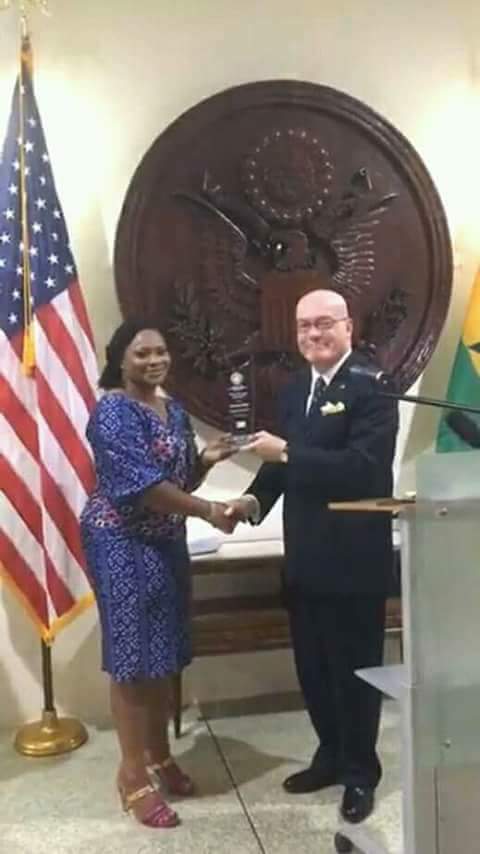 The Electoral Commission Chairperson, Charlotte Osei has been honored with the United States Department of State’s Women of Courage Award for 2017.

Presenting the award, the US Ambassador to Ghana, Robert P. Jackson affirmed that “Charlotte Osei epitomizes the phrase, woman of courage.”

Mr.. Jackson in his speech praised Charlotte Osei for her bravery before, during and after the 2016 general elections.

He noted the reforms Mrs. Osei undertook reforms at the Commission to guarantee the credibility of the 2016 election and minimise the risk of a disputed outcome.

Accepting the award, Mrs. Osei said she was “totally overwhelmed and humbled by this recognition” as she thanked the government of the United States of America.

She was, however, keen to note her success as the EC Chairperson owed to the efforts of many.

“… Although I am being recognized for my efforts for the elections last years, the success of the elections were not and could not be the reasons for one person’s efforts. Numerous people contributed in diverse ways to the successful elections and the national peace and stability we continue to enjoy.”

She also acknowledged the “truly invaluable guidance and support” she receives from her predecessor, Dr. Kwaku Afary Gyan as she thanked her staff and colleague commissioners, “who from the first day I stepped into office at the commission and even in our most trying times, continue to support me and help deliver on the constitutional mandate of the Commission.”

Mrs. Osei admitted there were times she carried “the weight of entire peace and stability of the nation” on her shoulders but support from her husband, children, family and friends saw her through

The Women of Courage Award is an American award presented annually to women around the world who have shown leadership, courage, and willingness to sacrifice for others, especially in promoting women’s rights.

Mrs. Osei could bag another prestigious honor as she is also up for the Chatham House Prize alongside Colombian President Juan Manuel Santos and Secretary General of NATO, Jens Stoltenberg.

According to the Director of Chatham House, Dr. Robin Niblett CMG, the nomination of Charlotte Osei was also based on her admirable supervision of Ghana’s peaceful and transparent electoral process in December 2016.