Celebrated Ghanaian hero, Tetteh Quarshie, is set to have a museum built in his honor at Akuapem Mampong in the Eastern Region.
On Tuesday, February 13, 2018, the Minister for Tourism, Arts and Culture, Mrs Catherine Abelema Afeku, cut the sod for the commencement of the project.

When completed, the museum will be known as the Tetteh Quarshie Cocoa Museum.

The multi-purpose, ultra-modern museum is expected to house both the upstream and downstream operations of the cocoa industry.

The Tourism Minister said the $3 million-dollar project is in honor of the late Tetteh Quarshie, who is still eulogized by many Ghanaians for being the first man to bring cocoa to the then Gold Coast.

The agriculturalist brought the cocoa seeds from the island of Fernando Po in 1876, now Equatorial Guinea, having stayed in the Central African country for six years.

Ghana has since become one of the world’s largest producers of cocoa since the seeds were introduced in the country.

cocoa_prices_and_income_of_farmers._tereza_hronova_people_in_need_ghana-400×266.jpgplay
Ghana has since become one of the world’s largest producers of cocoa since the seeds were introduced in the country by Tetteh Quarshie

Mrs. Afeku further stated that the construction of the museum had become necessary after the people of Akuapem Mampong requested for something to immortalise the late Tetteh Quarshie.

She noted that the museum, when completed, would be an iconic and game changer in transforming the rural farming town of Mampong into a vibrant international tourism destination of choice.

According to her, the museum should serve a great deal for the youth who want to learn more about Tetteh Quarshie and cocoa production.

“It’s best to add value to our cocoa since we are the second largest producers of cocoa in the world. To have a place where young people will come through to have interactive sessions, reading about Tetteh Quarshie, experiencing the pod, walking through the farm and seeing the value chain, how it is processed, dried and to the final or end product,” Mrs. Afeku asserted.

She added that the museum would also provide jobs for the people in the area, and the value chain that would create the economic activities, but the most important thing for the ministry was reiterating the president’s vision of adding value to cocoa in the country.

On his part, the Chief of Akuapem Mampong, Osabarima Kwame Otu Darte III, expressed gratitude to government for electing to honor a son from his land.

He, however, pleaded with the Tourism Minister to make sure the project is completed, unlike others that are started with much enthusiasm but are left as white elephants mid-way through their construction. 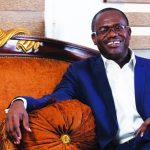