Though the exact number of deaths in could not be confirmed,  Governor Seriake Dickson, in strong terms, condemned alleged electoral malpractice and violence which marred the election  in Brass, Nembe, Ekeremor town and parts of Southern Ijaw Local Government Area.

The Independent National Electoral Commission (INEC) had scheduled the supplementary poll to hold yesterday after the December 5, 2015 gubernatorial election in the state failed to produce a winner. Chief Timpre Sylva is the candidate of the All Progressives Congress (APC) in the poll. APC is the ruling party at the federal level.

In a statement signed by his Chief Press Secretary, Daniel Iworiso-Markson, the governor accused  APC chieftains of masterminding the killing of innocent Bayelsans in Brass, Ekeremor, Nembe and Southern Ijaw and wondered why the APC would kill to capture power.

While saying the APC was not ready for one-man one- vote, Dickson  said the violence in the poll had vindicated his position that security agencies, particularly the military, were partisan and not willing to provide the enabling environment for a free and fair election to take place.

He accused the security agencies of providing cover for the APC to perpetrate violence and rig the election.

“To achieve their sinister plot, APC militants hijacked election materials and wrote results in many wards of Southern Ijaw, Brass, Ekeremor town, Brass while election  was disrupted in parts of Yenagoa and in a polling unit in Otuokpoti, Ogbia Local Government.”

The governor called on INEC to cancel the election in polling units where the poll  was hijacked and results written.

While calling for the arrest of the perpetrators of the killings, Dickson condoled the families of those who lost their dear ones.

But  the   Minister of State for Agriculture,Senator Heineken Lokpobiri, dismissed the claims that there were heavy shootings in Ekeremor that led to loss of lives.

According to Lokpobiri, an APC chieftain, though the claim had been traced to some PDP apologists, the conduct of the election in Ekeremor was peaceful,orderly and without violence.

Lokpobiri,who voted at about  12.10pm  in Ekeremor, stated, through one of his aides, Preye Amba, that the reported killing of security personnel in Ekeremor was callous and wicked.

“Election in Ekeremor went on peacefully and the resort to this by the PDP is just a way of laying the foundation to cancel the supplementary poll so that whatever advantage it had before now will be sustained. No shooting whatsoever in Ekeremor,”the minister said.

“Rather, it was the PDP, in concert with one Major Umar from 5 Battalion, Warri, which came to carry away electoral materials from Ekeremor to Egbema Angalabiri. We have it on record that the said major is on the pay roll of a known ex-militant leader bent on bringing down the APC in Bayelsa State.

“We call on the military authorities to investigate the role of the said major because he took away the materials without any other escort provided either by the police or the DSS.” 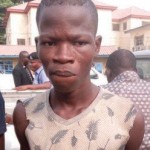