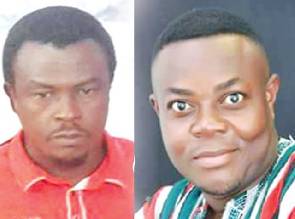 According to the lawyer, the kind of begging and apologies issued in court were too light-hearted to convince the court that they were serious and truly remorseful.

A lot more has to be done to minimise the gravity of their crime after they threatened on a live radio programme to kill some Supreme Court judges, he stressed.

One of the contemnors and radio host Salifu Maase known as ‘Mugabe’ had blamed his provocative comments on the absence of his producer. He said there was no one to restrain him after his producer allegedly collapsed.

At the second day of their contempt hearing at the Supreme Court in Accra, the presiding judge, Justice Sophia Akuffo was not impressed by their explanations and convicted them of criminal contempt.

They are to appear before the Court on July 27 for sentencing.

Pinting to possibility of a mitigated punishment, Egbert Faibille advised the convicted persons to file an application in court and ask that the judges give them the chance to “go and purge themselves of contempt”.

They could use five or 10 minutes of airtime daily to “recant and apologise” for a period of one month, he explained. After a month they would return to court and ask the judges to show mercy in view of their profuse show of regret.

Criminal contempt is a serious matter, he said, and weighing their explanations, the lawyer believes that will not be sufficient mitigation for the threatened judges.

Contributing to the discussion, another legal practitioner Victor Kojogah Adawuducautioned against whittling down the demeanour of the convicted persons.

“A person’s demeanour in court tells a lot” he said. He sought to rephrase Alistair’s supposed mental incapacity as a case of him being carried away when he sat behind the microphone.

Adawudu nonetheless condemned what he sees as a growing media belief that “bad news with sensationalism sells”.

Any sentence imposed by the court should not be seen as an attempt by judges to muzzle journalists because freedom must go with exercising responsibility which was lacking in the case of Montie FM 3.

“Everybody thinks it was unfortunate, regrettable and should not be done. Never again should it ever happen”, he criticised.