The Member of Parliament for Manhyia North has accused government of deliberately withholding the facts and details surrounding the transfer of two Guantanamo Bay ex-detainees to the country.

Foreign Affairs Minister, Hanna Tetteh, appeared before parliament for an in-camera briefing on Friday 19 February over the hosting of the two terror suspects, who have been in Ghana since January 7, 2016.

Dr Matthew Opoku Prempeh, who spoke with Class News on the issue said: “I’m scandalised by what I didn’t hear than what I heard. No reason has been given for accepting these Guantanamo detainees here. The Minister of Foreign Affairs spoke at length telling the countries where America has returned some of these killers. What she fails to say, which I’m scandalised by, is that all those countries were accepting their citizens. She said nothing to parliament except English,” the Minister lamented.

The MP further explained that “she never in her statement answered truly, the total number of deportees. She never told us that they had turned Ghana into a refugee transit cell. She never told us how the president, alone could have negotiated such an agreement,” he lamented.

Ghana’s Foreign Affairs Ministry said in a statement Wednesday January 6, 2016 that the two men “have been cleared of any involvement in terrorist activities” and would be accepted “for a period of two years, after which they may leave the country”.

In Africa, apart from Ghana, Cape Verde has also accepted two of such detainees. But the decision has been met with stiff opposition.

Mahmud Umar Muhammad Bin Atef and Khalid Muhammad Salih Al-Dhuby were held for more than 13 years at the detention facility in Cuba. They were unanimously approved for transfer by the interagency Guantanamo Review Task Force, according to a Pentagon statement.

The Minority in Parliament, earlier raised concerns about the failure of the presidency to consult the House over the matter since the news came to the limelight. A Former Deputy Minister for the Interior, K.T. Hammond, at the time, said the two should be sent back to Guantanamo Bay.

The Minority recently held a press conference and said the president’s unilateral decision to have the two transferred to Ghana, per an agreement between the US and Ghana, makes the Ghanaians president liable for impeachment. 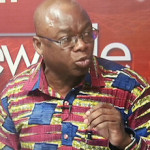