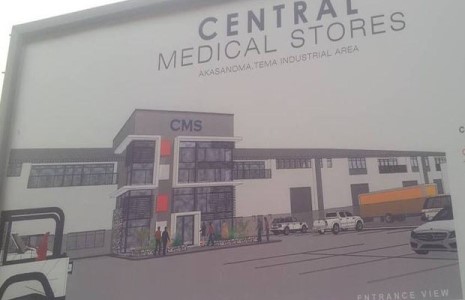 NMS Infrastructure Limited, a British-owned construction firm, has been awarded the contract to reconstruct the Central Medical Store (CMS) located at Akasanoma in the Heavy Industrial Area in Tema, almost a year after it was ravaged by fire.

The Ministry of Health (MoH) has approved the reconstruction of the ultra-modern facility at the cost of GH¢8 million.

Construction work is expected to commence after the premises of the razed down facility is cleared of debris. About GH¢300million worth of medicines and other consumables were destroyed by the fire, suspected to be work of arsonists.

NMS Limited is noted for the construction of Dodowa District Hospital and five similar hospitals being constructed in Fomena and Kumawu in the Ashanti Region, Sekondi in the Western Region, Abetifi in the Eastern Region and Garu in the Upper East Region; with additional upgrades being made to the Takoradi European Hospital.

When DAILY GUIDE visited the area, some of the structures which were not seriously affected by the inferno were seen to have been renovated and painted. A fence wall which was broken during the incident to permit ingress into the facility has also been rebuilt besides the demolition of weak structures which were ongoing in the compound.

In order to ensure continuous flow of waste, the main Tema sewerage system which runs through underground the facility is expected to be rediverted when actual reconstruction works begin in the first quarter of next year.

Medical supplies, essential drugs, medical equipment and food items estimated at over GH¢261 million were lost to the fire which seriously affected the healthcare delivery of the country.

It was alleged that the fire was a sinister work of some officials in Ghana’s medical supply chain who wanted to prevent exposure after some dubious procurement deals.

The GNFS and the Bureau of National Investigations (BNI) carrying out investigations into the suspected case of arson led to interdiction of Dr Constance Bart-Plange, who was then head of the National Malaria Control Programme (NMCP) and nine other workers of the Ghana Health Service (GHS).