An IT researcher, Kingsley Komla Elikem, has raised concerns about the cost and quality of the newly introduced digital property addressing system; the GhanaPost GPS App, while referring to the government as ‘lazy’.

The National Digital Property Address System was launched about a month ago to facilitate easy location of addresses and to boost emergency service delivery nationwide.

Many, following the introduction of the app have criticized government over monies being channeled into the operation of the app as well as its effectiveness as projected. Most of them accusing government of ‘duplicating’ an already existing app.

Vokacom, the company that designed the app has however come out to reject the claims, their justification being that it was built on a global addressing system that was designed solely by them.

Mr. Elikem argues that the eight-month period used to design the app was lethargic. According to him, it requires a maximum of just a day to produce the Ghana Post GPS app.

Kingsley, who did not want to sound politically biased, defended his statement, saying “it is not a government matter. We all have political affiliations in Ghana by the way.”

“But if you tell me that it took a government eight months to code…to write these codes that anyone can do in one day, you are a lazy government.”

Explaining the “one day” app design to journalists at the Ghana International Press Centre, the IT professional said:

“That was just a poor work. You sit down behind the computer, you write your codes, throw a fish net over the surface of Ghana, make sure that you use the cursor to pick the ends carefully…Whiles you are done you give a dimension to the fish net. It should be five by five meters and you would be able to generate this. One day. Eight months to do this work? That’s a lazy government.” 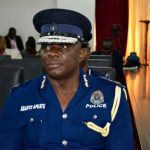