Minister of Communications Dr Edward Omane Boamah has said the November 7 elections will be based on practical proposals from all the political parties to the electorate and not merely on the mantra of “someone should go for another to come”, which he said was the case in the 2000 elections that brought the New Patriotic Party (NPP) into power.

According to Dr Omane Boamah, Ghanaians will vote based on developmental projects such as the revival of the Komenda Sugar Factory and others seen in the country. He added that they will also be looking out for the party that has the best proposals to solve the economic challenges they are facing.

He believed that the NDC government, with John Mahama as president, had embarked on several development projects in the country and that this feat positioned the party to sweep more votes in the elections.

Speaking on Asempa FM’s ‘Ekosii Sen’, political and news analysis programme on Monday May 16, Dr Omane said that the largest opposition party, the NPP, had not been able to put its house in order, hence, could not be the alternative for Ghanaians in the elections.

He observed that violence and thievery had characterised the NPP in opposition, a situation he believed rendered the elephant party incapable of ruling the country.

He has, therefore, asked the NPP to stop what he described as unnecessary attacks on the government and President John Mahama as that will not make them the alternative for Ghanaians.

“They [NPP] should come to the table with ideas,” he urged 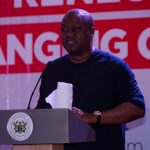