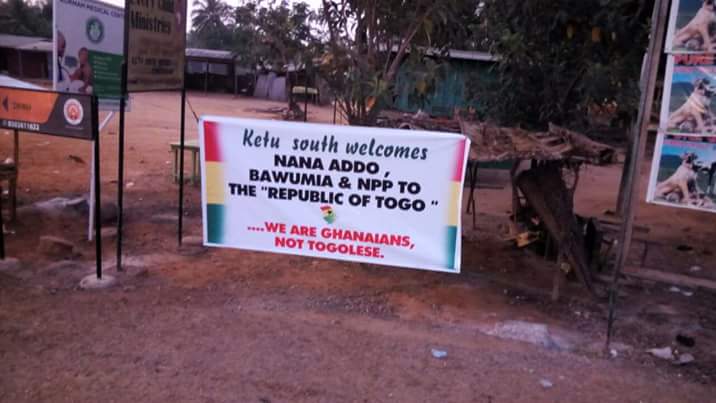 Ghanaian voters resident in Togo, have set up protest banners ahead of a visit by the New Patriotic Party (NPP) and its Flagbearer, Nana Akufo-Addo, to the Ketu South Constituency of the Volta Region.

The protests appear to be in response to the NPP’s claims that the governing National Democratic Congress (NDC) has plans to bring in Togolese to vote in the 2016 elections. These banners were hoisted Saturday evening at vantage points in the Ketu South Municipality ahead of Nana Addo’s visit to the area today. But some NPP supporters led by their Parliamentary Candidate for the area, Maxwell Lukuto, attempted to strip down the banner and reported the issue to Police.

This however did not go down well with some youth believed to be members of the NDC leading to some unrest in the area. The Police have since intervened and are managing the tensions. Nana Akufo-Addo is expected to hold a rally in the area later today [Sunday]. The NPP Running Mate, Dr. Mahamudu Bawumia, in 2015 held a press conference to announce that the party had uncovered evidence of close to 80,000 Togolese registered as Ghanaians on the voters’ register thus bloating the register.

The Volta Regional NPP also accused government of diverting state resources to Togo in exchange for votes in the December polls. The NPP is yet to present concrete evidence in this regard, whereas the NDC has rejected these allegations, explaining that because some residents of the Volta Region have siblings in Togo, what the party has been doing is to encourage such people to come back home and have their names captured on the Electoral Commission’s database so they can vote. 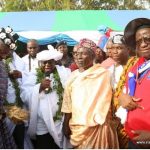