The Paramount Chief of the Dormaa Tradition Area in the Brong Ahafo Region, Osagyefo Oseadeyo Agyeman Badu II, has said Ghanaians must be proud of the achievements and gains made so far by the John Mahama-led National Democratic Congress (NDC), so the administration can do even better in the quest to develop the country.

According to him, the usual Ghanaian way of thwarting everything done by successive governments has never helped in nation building and so it was time the citizens discontinue ingratitude, and give praise and commendation where it is due, so they can attract enormous developmental projects to their areas and the country at large.

“My people, it is true salt does not praise itself. If anybody can convince you that a government will come and will be able to satisfy everybody, and that we are all going to be happy, it is never true. But when that government does something commendable, we must appreciate that administration, when you meet people like this, you must say it because he is doing well”, he said.

Linking the December 7 presidential and parliamentary elections to his submission, he said “Very soon Ghanaians will be going to the polls, am not here to ask you to vote for anybody but please am begging you citizens of Brong Ahafo, whoever will be chosen, whatever he would be able to do, we must commend him so he would be encouraged to do more”.

Osagyefo Oseadeyo Agyeman Badu II, went on “If we say we won’t acknowledge what Rawlings, Kufuor, Atta Mills and now our sitting president is doing, it will get to a point they won’t be bothered to work hard. I am pleading; if the person does something good applaud him”.

The powerful Brong Ahafo Regional chief, said this when he recently met with indigenes of the region in the United States of America (USA).
Speaking to a packed-room of Ghanaians in that country in the presence of the First Lady, Lordina Mahama, Oseadeyo Agyeman Badu II highly commended President Mahama for providing unprecedented potable water to Ghanaians said, the various hospital projects being embarked upon by the government were laudable.

“Without any fear of contradiction, with water, our president; no president has given us water like His Excellency, John Dramani Mahama, has provided. Amidst cheers and claps he continued “Evidences are abound, those of you who lived in Accra, you knew about the Adenta water problem. Today, is the story the same? When you go to Nungua is it the same? When you go to Kumawu, and across the country”, the impressed chief testified.

In reference to President Mahama, the Chief said, “when he became president, the percentage of the Ghanaian people who had water was hovering around 50 but he has now raised it to 72 percent. And so if he hasn’t done anything at all, he has given us water”.

He also enumerated hospital projects such as the rehabilitation of the 420-bed capacity Ridge Hospital now the Greater Accra Regional hospital, the 600-bed University of Ghana Teaching Hospital first of its kind in the West Africa sub-region, to train 1,000 doctors within 5 to 7 year.

“It is not only water he is providing when it come development. When it comes to health, go to Accra Ridge it is there, if you go to Legon it is there, if you go to LEKMA Teshie-Nungua, it is there. I can mention them. Let us go to Ashanti Region, go to Kumawu where the chief can be a chief in Dormaa and I can also be a chief in Kumawu, go and see the hospital the president has built there, the Military Hospital and many others. But while he does all this, if you don’t take care, some may still ask that what has he done?”

Osadeayo, challenged the indigenes to check on the internet to confirm his claims.

The $217 million hospital project located on a 400 acre land behind the Noguchi Memorial Institute for Medical Research of the University is being funded by a loan facility agreement between the Government of Ghana (GoG) and Government of Israel.

The LEKMA hospital was inaugurated in 2010 to serve residents of Teshie, Nungua, Tema, Ashaiman, Lashibi, Spintex, and other adjoining communities.
It has special research attention, focused on malaria but deals with all other medical conditions. The Ultra Modern health facility has surgical theatre, Eye Nose and Throat (ENT) Scan and many more.

He mentioned the Second Military Hospital at Afari near Kumasi and Kumawu District Hospital in Ashanti Region.

Touching on the Single Spine Salary Structure (SSSS) implemented in 2010, Osadeayo Agyeman Badu II said, if Ghanaians will speak the truth, they would attest to the fact that, it has enhanced their lives since the over 60,000 who are employed by government have had their salaries tripled and quadrupled.

“I can’t say it has satisfied everybody but it must be said that salaries of government workers would have been tripped and quadrupled”, said.
Using the American government as an example, he said if one is given an amount of dollars and later it is increased because of a policy, the taste and expenditure of the person may necessarily increase and so he or she is likely to say that the government is not going well.

“In this world, if your money is doubled like you here, if Obama used to give you a thousand dollar and he increases it to a thousand five hundred, you are likely to increase your way of spending and your taste may go higher and so your money won’t be enough for you and you may say the administration is not doing well. This it is not going well, we like saying it too much. It brings people down. It does not encourage leaders to do their best but when we do the opposite, they will be motivated to perform to your satisfaction”.

The chief who said he was well aware on provision in the Constitution that bars chiefs doing active partisan politics said he could not tell anybody to vote for any candidate but urged Ghanaians to accept anyone that is chosen in the impending elections and give all support to that president. 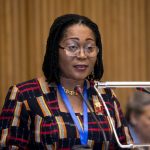