Ghanaians will have to brace themselves up for possibly another ‘dumsor’ experience in the coming month, as the Floating Production Storage and Offloading vessel (FPSO) Kwame Nkrumah will be shut down from the 15th to 30th March.

The Deputy Minister of Power, John Jinapor, who made the disclosure on Peace FM on Friday, said the move is to allow for the facility to undergo scheduled regular maintenance.

He said this meant gas will not be flowing through the pipes during that time.

“We are working to ensure that, during that period, the situation would be handled. It is a critical moment for us and we’re trying to work things around,” John Jinapor said.

He, however, failed to state clearly if shutting down the FPSO will cause another power challenge; as Ghanaians recently came out of a power crisis that hit the country for nearly four years.

The facility which operates in the Jubilee oil fields off the coast of Ghana has the capacity to process 120,000 barrels of oil per day and has a storage capacity of 1.6 million barrels, with an associated gas production capacity of 160 million standard cubic feet a day.

President John Mahama while presenting his state of the nation address on Thursday, February 25, boasted that he had successfully ended the power crises which saw lots of businesses collapsing and several people losing their jobs. 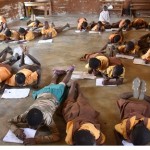