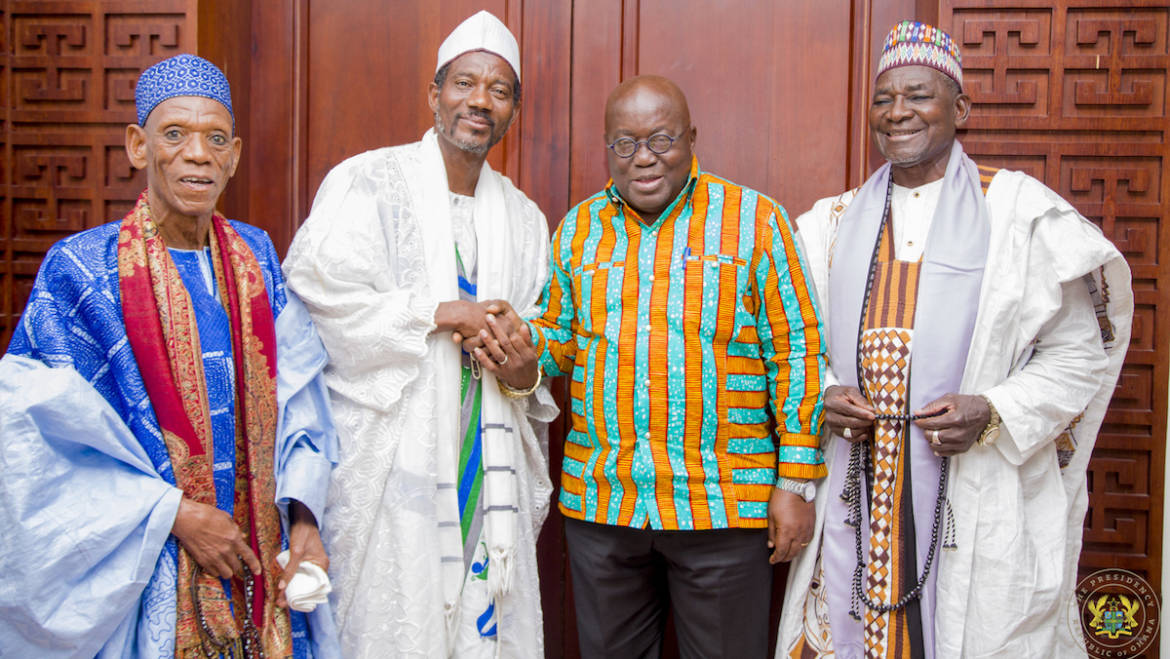 The President and Leader of the Tijaniyya Muslim Council of Ghana, Sheikh Khalifa Abul-Faidi Abdulai Ahmad Maikano, has lauded the President of the Republic, Nana Addo Dankwa Akufo-Addo, for not relenting in his fight against the illegal mining phenomenon, known as ‘galamsey’.

According to Sheikh Khalifa Maikano, “we hail and appreciate your efforts in combating the menace of galamsey in the country. And, if you want to know, the populace of the country are happy about that. Congratulations sir.”

Lamenting the neglect of the Tijanniya Muslim Council by the previous administration, Sheikh Khalifa Maikano indicated that “we have been forgotten, notwithstanding all efforts by my late father, who instituted annual Quaranic recitations to ensure peace in Ghana.”

Sheikh Khalifa Maikano stated that “when means of transport were distributed to religious organisations and some Chiefs, we were conspicuously left out.” Again, he added that the Council was not invited for national events, largely because of their association with the then leader of the opposition, Nana Akufo-Addo.

Efforts he put in place to drive investment into the country in previous years, he indicated, were also thwarted by “obstacles”.

Nonetheless, the Tijaniyya Leader was hopeful that under the Akufo-Addo-led administration, greater collaboration would exist between government and the Tijaniyya Muslim Council to aid in the creation of jobs for the teeming masses of Ghanaian youth.

“Prang cannot be left out”, he said, explaining that with 1.5 million visitors to the town annually, tourism can become a major avenue for the creation of jobs for the youth.

Touching on agriculture, Sheikh Khalifa Maikano stated that the Tijaniyya’s possess vast tracts of lands in all regions of the country, and, thus, advocated for partnership with government in the cultivation of cashew, cocoa, rubber, maize and soya beans, as a means of diversifying the country’s agriculture.

The Tijaniyya Muslim Council of Ghana, Sheikh Khalifa stressed, is endowed with creative and talented members who can be put at the disposal of government for the realisation of its developmental agenda.

He also appealed to the government to consider members of the Tijaniyya Muslim Council to serve on the advisory boards of the Ministry of Chieftaincy and the Ghana Education Service.

On his part, President Akufo-Addo thanked Sheikh Khalifa Maikano for the courtesy call and “for the important work that he is doing for our country. I have been to Prang and I know how hundreds and hundreds of thousands of Ghanaians take their spiritual nourishment from him.”

He assured that his government will hold discussions with the Tijaniyya Muslim Council and explore ways by which Prang can be developed fully into a major tourist destination for the country, and also engage the sect in other areas of co-operation.

President Akufo-Addo assured Sheikh Khalifa Maikano that the “friendship we had even before I got here (Presidency) will become even greater now that I am here. I will continue to expect him to pray for me and my government, that God will give us wisdom and a good heart to carry out the task given to me.”