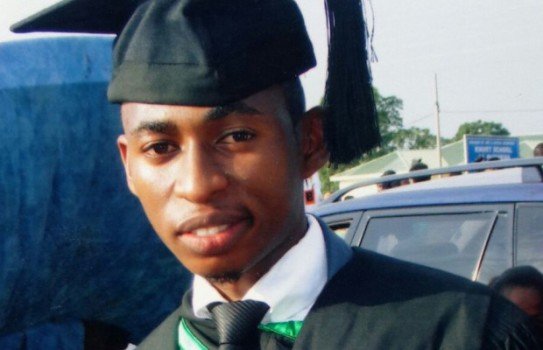 The 25-year-old graduate of the Kwame Nkrumah University of Science and Technology (KNUST), Nazir Nortei Alema, who left home to join the swelling ranks of the Islamic State (ISIS) in Iraq and Syria, a terrorist organization, has sent a message via Facebook to greet friends and family.

Nazir captured local and international news headlines in August, when news of his decision to join ISIS broke after his parents told Ghana’s national security of his decision.

The National Security later confirmed the report and raised an alarm of an agency in Ghana that was targeting and recruiting young Muslims from tertiary institutions to join ISIS.

On Wednesday November 11, a message popped up on Nazir’s Facebook wall. The message read “As-salaamu ‘Alaikum, From The Islamic State, with Joy.”

Although Citifmonline.com cannot independently confirm if Nazir posted the comment himself, some family and friends who responded to the post have confirmed he owns the account.

According to them, it is the same account he used in Ghana before his sudden disappearance.

With a degree in Geography and Rural Development, Nazir Nortei Alema is one of the several suspected Muslim youth from Ghana believed to have joined the terrorist group, which has gained notoriety for public beheading of their opponents or those they regard as infidels, attracting worldwide condemnation.

Nazir’s trip to the training grounds of the so-called Islamic State, started on 2nd August 2015, soon after his completion of the mandatory National Service in Ghana, which he undertook at the Statistical Service.

Since August 2015, Nazir’s family has not heard from him after he confirmed his ISIS membership via whatsApp.

Extracts from Nazir’s WhatsApp message, received by his brother Kabiru Alema read as follows: “Pray for me, for I will never forget you in my prayer and it’s my hope and prayer that we meet again if not in this world then in Jannah (paradise). I love you all. May Allah grant us understanding and guide us all to the straight path. Asalaamu Alaikum.” “I told you a lie to please my Allah. The deception was to go do some research work in far away Prestea while the main idea was to move far away from you all to the Islamic State (IS). I know it might sound kind of crazy for you but your son really had to take this bold step to get out of the corrupt system of Ghana which has democracy first on its list,”

Most of the comments from friends and family appealed to Nazir to return home because they were missing him.

But Nazir did not respond or like any of the comments that followed his post. Some of his supposed relatives who immediately sent him private messages via Facebook upon seeing the post, have confirmed to Citifmonline.com that he never responded to any of them.

Some of the comments that followed his post read “Bro where are you.”

Another said: “U know we been looking for u for some time now.”

“How come u didn’t tell me this?” “Nazir Don Allah where are you? Please call home. You know everyone is sick worried about you. Plead call.” “Wasalaam wa rahma, hp u doing great my bro. Kindly call home we miss u a lot.”

Others read “ooooo NAZ what happened to you. u should know better than them.#ComeBack.” “Husbi happy to hear from u”, “Alhamdulilah at least we know you are alive. If this is really you . Your family love and miss you. ALLAH knows best.”