President John Mahama has stated that plans are underway to reclassify mining in the country in order to safeguard the country’s lands and prevent it from further damage.

According to President Mahama, it is time the country takes steps to reclassify mining by separating small scale mining from artisanal mining.

He made the comments during the inauguration of Gold Coast refinery in Accra.

President Mahama, last month disclosed that the military personnel will no longer be used to flush out illegal miners in the country.

He also indicated that government after an assessment exercise has realized the strategy is not feasible hence a new approach has been adopted.

The Presidents comments comes after the Ministry of Lands and Natural Resources through its Minister Hon. Nii Osah Millsin February this year, launched the Minerals and Mining Policy aimed at ensuring that mining is integrated to the economy and contributes to the sustainable development of the country on 23rd February, 2016.

The policy which was initiated 17 years ago had to go through a comprehensive review by various stake holders.

The sixty paged policy document themed ‘’ Minerals and Mining Policy of Ghana” is to highlight on the regulation of small-scale mining, link mining to development, effect minerals licensing regime, regulate the environment as well as address occupational hazard and ensure safety and fiscal policy in mining.

It was also to allow for the proper use of lands by illegal miners by reclassifying mining into groups of about three being small, medium and large scale mining.

Gold Coast Refinery ltd is positioned to be the first state-of-the-art gold refinery in West Africa. With a defined commitment to our clients worldwide, we invest in modern technology and equipment, empower expert personnel and develop comprehensive and efficient processes to transform raw materials into high quality branded goods.

No value addition to Ghana

Although Ghana is the second-highest gold-producing country in Africa after South Africa and has attracted a number of multinational companies, the mineral from such companies are not refined but exported mainly to refineries in South Africa and Switzerland.

The country’s two refineries can only refine gold produced by the small-scale sector.

That aside, the licensed gold and diamond buyers who buy these minerals also export them to other countries without value addition. 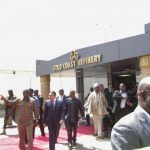