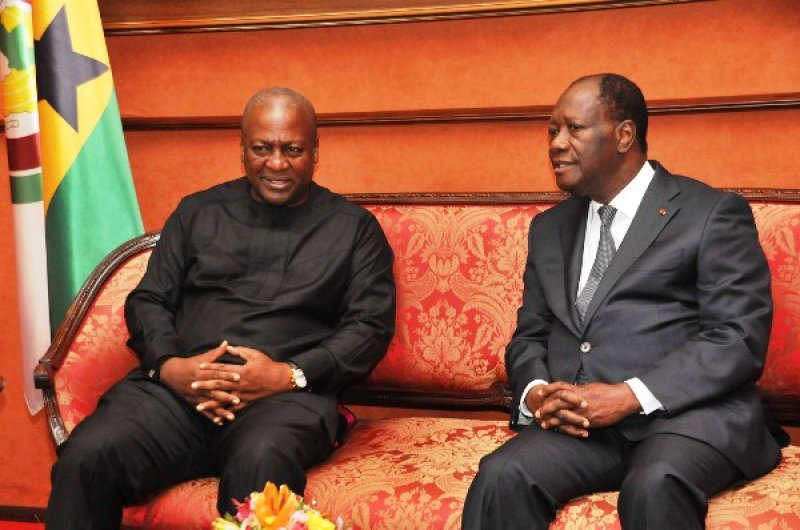 Ghana and Côte d’Ivoire have signed an agreement to renovate the bridge between Noé in Côte d’Ivoire and Elubo in the Western region.

The bridge which links the two countries facilitates trade.

President John Mahama and his Ivorian counterpart Alassane Ouattara witnessed the signing ceremony after the two had early on sat in a closed door meeting at the Presidential Palace.

In a joint press conference, the two leaders said they discussed opportunities for mutual cooperation, security, diplomacy and economic growth.Ghanapoliticsonline.com

President Alassane Ouattara congratulated President Mahama on his decision to sign onto the IMF as a way of injecting fiscal discipline into the macro economy.

He was also grateful to the Ghana government for hosting refugees from Côte d’Ivoire when election conflict broke out in that country.

He said his government is working to ensure that the refugees return to Côte d’Ivoire as there is relative peace.

President John Mahama said the relations between the two countries would be stepped up towards trade promotion to give meaning to the regional integration drive.

He said he together with President Ouattara will at the next AU Summit push for the Lagos Abidjan corridor project to take off.

President Mahama said Ghana is encouraged by the 9% growth rate of Côte d’Ivoire and hope to walk in its strides.

The President thanked Côte d’Ivoire for its assistance in the energy sector.

Meanwhile, President Mahama has pledged Ghana’s total support to Côte d’Ivoire’s bid to serve as an observer on the UN Security Council.