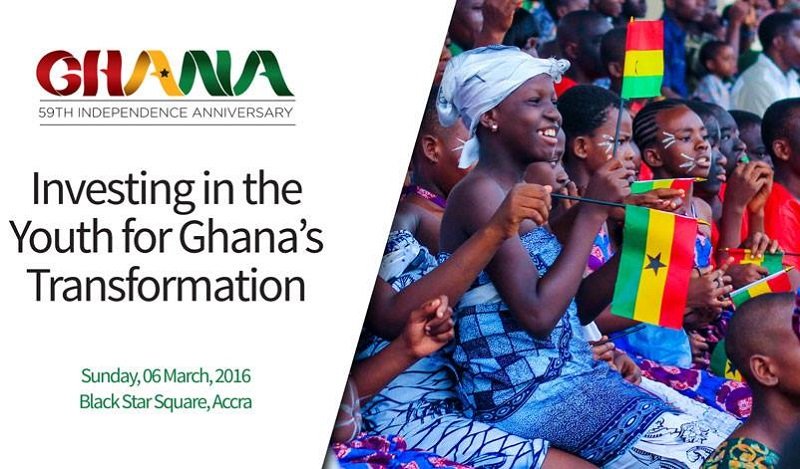 Ghana marks its 59th birthday today with a colourful national parade of schoolchildren and contingents of security personnel at the Independence Square in Accra to be addressed by President John Dramani Mahama.

Simultaneous regional and district parades will be held across the country during which representatives of President Mahama will take the national salute and read the Head of State’ s speech.

The 59th Independence Day Anniversary is on the general theme: “Investing in the Youth for Ghana’s Transformation”.

Presidents Uhuru Kenyatta of Kenya and Jose Mario Vaz of Guinea-Bissau have arrived in Accra to participate in Ghana’s 59th Independence Anniversary.

They were received on arrival by the Vice President, Kwesi Amissah Arthur.

The two leaders inspected a guard of honor mounted by the Ghana Army.

President Kenyatta is in the country as a special guest of honor for the celebration.

Christians across the country will dedicate the Sunday Church Service to pray for the nation, whilst scores of other personalities would throng the various entertainment centres, and beaches in their respective areas to commemorate the occasion.

According to history, Ghana’s independence marked the end of 113 years of British colonial rule and ushered the country into constitutional rule under the leadership of the first Prime Minister, Osagyefo Dr Kwame Nkrumah.

Though Osagyefo Dr Nkrumah spearheaded the independence struggle and eventually secured independence for the then Gold Coast on March 6, 1957.

The country has, had a chequered political history characterised by four Republican constitutions and long spells of military intervention in national politics.

The First Republic, which lasted for nine years between I957 and I966, witnessed the laying of what could be described as a robust economy, including the building of virile and solid infrastructure which currently serves the nation.

Some of the infrastructural projects include the Tema Harbour, the Akosombo Hydro-Electric Dam, the Tema township, the Tema Oil Refinery and the Tema Flour Mill. Other projects which have collapsed formed part of the Convention Peoples Party (CPPs) Seven-Year Development Plan” I963 to I970.

Dr Nkrumah’s dream of economically transforming Ghana was truncated by the first military uprising in the country on February 24, I966 which brought the National Liberation Council (NLC), chaired by Lieutenant General Joseph Ankrah, into power.

The NLC, which accused Dr Nkrumah of unbridled dissipation of the country’s wealth and dictatorship, failed to continue with his lofty vision and handed over political power to the Progress Party (PP), led by Dr Kofi Abrefa Busia, after elections in 1969.

The Second Republic under Dr Busia lasted for only 27 months, having been shown the exit on January I3, I972 by the National Redemption Council (NRC) under the leadership of General Ignatius Kutu Acheampong.

The NRC accused the PP government of taking away the few amenities and facilities which the military and the police even enjoyed under the Nkrumah Regime.

The NRC later metamorphosed into the Supreme Military Council (SMC), but a palace coup saw General Acheampong being replaced by Lieutenant-General F.W.K. Akuffo in I978 as the Chairman of the SMC and Head of State of Ghana.

As the SMC was preparing to hand over political power to an elected government after a Constituent Assembly had drafted the Third Republican Constitution, the country was hit by another military uprising on May 5, 1979 which was swiftly quelled by the authorities.

The architect of the uprising, Flight Lieutenant Jerry John Rawlings, was arrested and hauled before a court martial, but before the dust could settle on the issue, a group of officers and men from the Ghana Armed Forces, on June 4, 1979, seized the reins of power and ousted the SMC.

The Armed Forces Revolutionary Council (AFRC), led by Flt Lt Rawlings, allowed the elections which were underway to go ahead, with the People’s National Party (PNP) winning for its leader, Dr Hilla Limann, to become the President of the Third Republic in September I979.

On December 31, 1981, Ghanaians woke up to hear the voice of Flt Lt Rawlings on radio claiming that he had overthrown the government of the PNP and launched a revolutionary government called the Provisional National Defence Council (PNDC) to re-arrange the social and economic order of the country.

After 11 years of military rule regulated by the issuance of decrees, the Fourth Republican Constitution was born and a general election held on December 7, I992.

The election was won by the National Democratic Congress (NDC), led by Flt Lt Jerry Rawlings.

He was retained in 1996, however, in 2000 the NDC’s presidential candidate, who had been the Vice-President from I996 to 2000, Prof John Evans Atta Mills, lost the elections to Mr John Agyekum Kufuor of the New Patriotic Party (NPP).

President Kufuor managed the country for two terms and in 2008 the electorate returned the NDC, whose presidential candidate was Prof Mills, to political power in the elections.

President Mills took over from former President Kufuor on January 7, 2009.

He took bold measures to build a robust economy and deepened the development process of the country on the mantra Better Ghana Agenda.

His Vice President, Mr John Dramani Mahama assumed the highest office of the land to complete the unexpired term of the late President Mills. 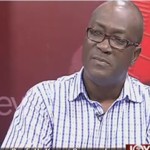 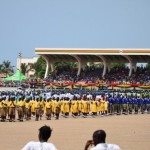