The Minority Leader in Parliament Osei Kyei Mensah-Bonsu has said the Gh¢3.6 million spent on re-branding about 116 buses is naked thievery aimed at emptying the national coffers. The John Mahama-led administration has come under fire over the use of the Petroleum Fund to rebrand the Metro Mass Transit Buses. The legislator, who first brought the issue to the public domain, said officials behind the deal must be brought to book. “Why would we be raising issues if we didn’t think that Ghanaians have been shortchanged? This is open thievery in our governance, that is what we are talking about, naked stealing of public money, and we feel that the person who took the decision must be sanctioned,” the MP for Suame told Kumasi-based Ultimate FM. “That is what we intend to do, this cannot go on, 420 buses are supposed to be rebranded, what we have now is 116, they are bringing additional buses and if we don’t raise issues, they will continue to reap from the public purse,” the Minority leader told host Benjamin Yamoah. Per the arrangement with Smarttys Management and Production, the company that did the job, branding for each bus cost the nation GHC31.000. The minority has called for a probe into the matter but the Majority has defended the cost, saying it is justifiable. The owner of Smarttys production is allegedly a popular actress and a TV presenter – Selasi Ibrahim – who is often seen at gatherings and rallies of the ruling party. Mensah-Bonsu argued that Metro Mass Transit Company could have raked in money if the rebranding space was rather given to a private company to brand than the government. “How much is government going to pay to Metro Mass for doing this, if a private company had done this, they would have charged heavily, because that space is a global advertisement, this arrangement was done by government, and that is why we are probing into it,” he said. 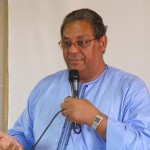