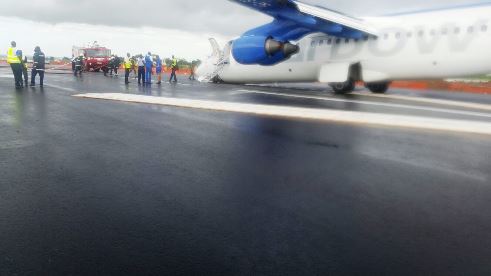 Engineers of the Ghana Civil Aviation Authority (GCAA) have been dispatched to Tamale to ascertain the cause of today’s crash landing involving a Starbow Airline Flight S9110 which was en route from Accra to Tamale.

The flight with registration number 9GSBB shot through the “barricade at the end of the Tamale Airport runway and stopped,” an official statement from Starbow said.

The Deputy Director General Technical of the GCAA Martey Boye Atoklo, who confirmed the incident, disclosed that a team of experts will be in the Northern regional capital to commence investigations into the matter.

According to him, Starbow flights to other parts of the country are flying as scheduled and there are no disruptions as a result.

It would be recalled that a Starbow flight Tuesday morning was involved in a near-crash as one of the pole holding the front tyres of the plane developed a problem while it was taxing to land properly.

“It is noteworthy that both the crew and the passengers were disembarked safely via the stairs.

“Our sincere concern goes out to all the passengers, friends and families involved. We are still gathering the facts concerning the events. Starbow is cooperating fully with the authorities in charged.

“We’ll inform the media of any significant additional information as soon as it is immediately available,” the CEO of Starbow James Eric Antwi said in a statement.