He explained on NEAT FM’s morning show ‘Ghana Montie’ that, the two platforms are more credible than the Institute of Economic Affairs (IEA), known for organizing such events.

“We [NDC] have made it clear that we will not partake in IEA’s debate because they don’t give us our due respect in this particular election year,” he said.

Adding that, “President Mahama is ready to debate Nana Addo on another platform, IEA is an individual organization. There’s NCCE platform, there’s Ghana Broadcasting Corporation platform that is a national platform”

Mr. Koku Anyidoho comment comes a week after President John Dramani Mahama throw a challenge to the NPP flagbearer, Nana Akufo-Addo to come and debate him publicly on the issues affecting the nation.

President Mahama noted that, the debate will afford both parties an opportunity to set the record straight on a number of issues including the state of the economy.

But the NPP has rejected the challenge claiming the NDC ignored a similar event from the IEA. According to John Boadu, acting Chief Scribe of the NPP, President Mahama and his party should officially write to the NPP if they want a debate although they will not participate.

However, Koku told host Kwesi Aboagye that “Why should we write to them officially, the president has dared Nana Addo to a national debate on a national platform. Akufo Addo should stop running away”. 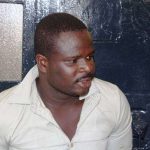