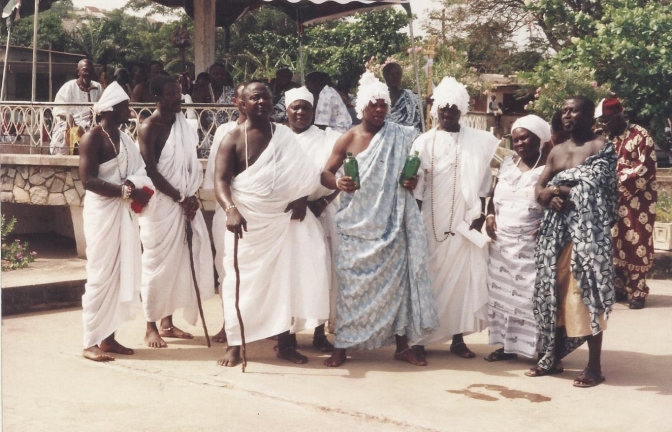 Chief priests in the Ga Dangme traditional area have described as shocking, the silence of the NPP leadership on a recent attack on one of its leaders, Nii Attoh Quashie in the Ablekuma South constituency.

According to the priests, such acts need to be condemned in no uncertain terms or else could lead to chaos in the 2016 elections.

The main opposition New Patriotic Party – NPP, has been fraught with a myriad of problems some of which have turned violent leading to the damage of property and some people losing their lives.

Speaking at a press conference a week after the attack, president of the priests Nuumo Blafo said “as a traditional authority we were shocked to hear that some young men of the NPP attacked one of our revered elders and a founding member of the NPP, Mr. Joshua Attoh Quashie.

“We the Ga Dangme council of Wulomei have not heard any condemnation from the political party he Mr. Atto Quashie belongs to and this is our worry.

Mr. Quashie was to address a press conference over the internal wrangling within the leadership of the New Patriotic Party. Before he could start some youth group believed to be supporters of the party’s flagbearer, Nana Akufo-Addo scattered the chairs and canopies arranged to host the invited guests.

There was another youth group that stormed the area to confront the earlier group but for the intervention of the police, the incident could have turned bloody.

The priests said “we are simply worried about the turn of events on the political landscape. Although the Wulomei are barred by the 1992 constitution from engaging in partisan politics, the same constitution guarantees us the right to freedom of speech; that is why we are commenting on this issue.

“There’s a proverb that says when the ear is slapped, it is the eye that sheds tears. So as leaders, if we keep silent and anything unfortunate happens in the country we would have ourselves to blame.”