Samuel Okdujeto Ablakwa, says the Akufo-Addo government ,cannot find the money to continue supporting the programme which makes it unsustainable.

“What is clear to me is that government is going to struggle to find the money. For an adequate and proper implementation of Free SHS, you would need GH¢600 million a term,” the Member of Parliament for North Tongu said.

According to him, the government got the budgetary calculations wrong and quoted a different figure of what the actual cost of the policy will be.

“They got the numbers wrong and we are not the only ones [Minority] saying that as the Ghana National Coalition on Education and the likes of Professor Oduro at the University of Cape Coast, have all said the same thing.

He said, the numbers are not adding up and the government would struggle to find the funding for its number one campaign policy.

Mr. Okudzeto’s comment, comes on the heels of the cry from heads of the SHSs that they are yet to receive funds to start the policy next week.

In some few days, new entrants to the SHS, will enjoy tuition and other amenities free of charge; in fulfillment of a long held campaign promise the New Patriotic Party (NPP) made as far back as the 2008 elections.

The promise gathered momentum in the 2016 elections, despite an attempt by the previous National Democratic Congress’ (NDC) government to implement the policy.

Having won the elections, the Nana Akufo-Addo government, says it will not compromise on implementing the flagship policy, despite a number of criticisms some of which came from within the government in power.

The president, at any given opportunity, never fails to mention the policy and his obsession to execute it through his “vibrant and energetic” Education Minister, Dr. Matthew Opoku Prempeh.

During one of such programmes- the launch of a logo for the free education policy- President Akufo Addo, said the government was determined to sustain the policy.

But speaking to Raymond Acquah on Upfront on JoyNews on the MultiTV channel on Wednesday, Mr. Okudzeto, said any attempt to proceed with the programme in its current form, woukd only compromise the quality of education in the country.

“The policy is not sustainable especially under the current circumstances; if they want to do so because of political expediency, quality will suffer.

“Government will not be able to sustain the Science Resource Centers as well as the renovation programme which was started by the John Mahama government, which ensured that teachers are recruited,” the former Deputy Minister said.

He pointed out to a vacancy for 17,000 teachers for the SHS who the previous administration got financial clearance for yet to be recruited.

Mr. Okudzeto, also blamed current problems with the computerized school selection and placement system on government’s replacement of the competent core staff at the secretariat.

“It has been very chaotic and messy and it is clear the focus was on propaganda, razzmatazz, launch a logo and ambassador when really [they] should have been working,” he said.

Suggesting ways to fix the system, he said some of the experienced hands at the Ghana Education Service (GES) who were sacked, must be engaged.

He claims there has been a massive reshuffling at GES, especially with those in charge of secondary education, which is not serving the interest of the Service. 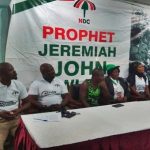