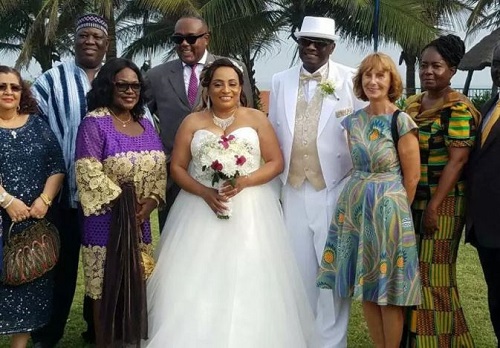 Former Tourism Minister and Ambassador to Czech under the erstwhile John Evans Atta Mills’ administration, Zita Okaikoi has sealed off her remarriage in a private ceremony.

The former government appointee upon her marriage now is believed to go by the name, Sabah Zita Benson.

she intended to keep the wedding from the glaring eyes of the general public, social media broke the news and some pictures were shared from the ceremony.

It cannot be confirmed why and when Zita’s marriage with Mr Andrew Okaikoi hit the rocks but it can sure be confirmed that the former government appointee has tied the nut with another man. Some congratulatory messages that were sighted after rumors were rife of the marriage come to confirm the event.

Very little information is available concerning the new husband of the former ambassador. Want to tell about a local problem? Know someone who is extremely talented and needs recognition