Young voters who will cast their vote for the first time on December 7 are yet to be convinced by any of the seven presidential aspirants.
With 10 days to Election Day, Gifty Naa Ameley Armah, 25, said she is still figuring out who to vote for.

Armah, so passionate about sanitation, health and education, skewered the Mahama administration for failing to tackle flood in flood-prone areas, citing her area, Odawna, to support her criticism of President John Mahama, who is seeking a second term.

“I am actually disappointed in the current government. There is a high possibility that I might not for it.
“I am coming from the fact that I live in a flood prone area where things have not been done to curtail it.

“I was looking forward to it being solved, instead, it was used to make a flyover that is going to make the drainage even worse.
An estimated 1.4 million first time voters have been added to the voters’ register, bringing the total registered voters to around 15 million.
“There are some interesting ones that I think if they are given a chance to be president, they will do it, Anokye Kofi Owusu, 20, said after saying he is not totally convinced by the pledges of the presidential nominees. “I do think the One-dam-one-district is a very realistic one.”
He said young voters want messages that can convince “especially those without jobs that when they become president, they will be able to bring out measures to create jobs for the people.
Abigail Ohenewaa Saforo, 21, believes the presidential aspirants are just promising anything to win votes.

“I haven’t been convinced by any of them. I believe they are just saying it for us to vote for them,” she said.
However, Saforo believes the Progressives People’s Party has a message that resonates with her but expressed fear the party may never win political power in Ghana.
“I have been a little bit convinced by the one party that I know will never come to power. That is the PPP.”
Beatrice Serwaa Mensah, 21, also said the campaign promises are just strategies to win votes.
“They are all trying to bring out something that will make the public buy into their ideas,” she said.

She maintains that building infrastructure is good but added she wants to be a businesswoman one day and that tax reduction or rebate is something so dear to her.
“My main focus is on tax and tariffs,” importing goods are much cheaper than our goods here so why don’t they reduce the tax on imported goods,” she said. 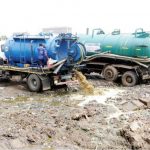